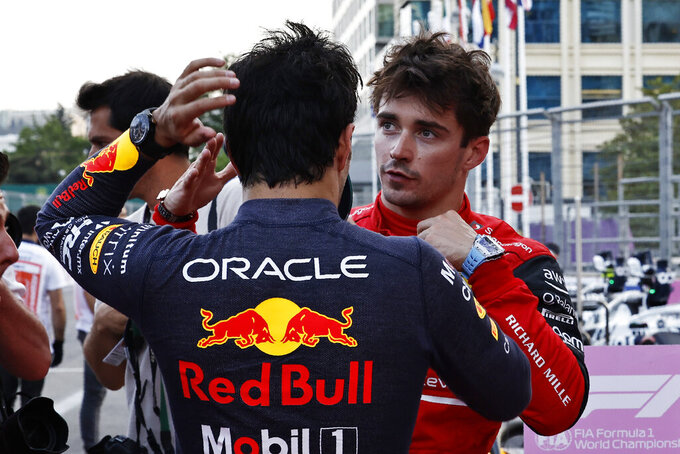 Ferrari driver Charles Leclerc of Monaco talks with Red Bull driver Sergio Perez of Mexico after setting the pole position in the qualifying session at the Baku circuit, in Baku, Azerbaijan, Saturday, June 11, 2022. The Formula One Grand Prix will be held on Sunday. (Hamad Mohammed, Pool Via AP)

BAKU, Azerbaijan (AP) — Charles Leclerc is back on pole. Now comes the tricky task of converting it into a win.

Leclerc won the pole for the fourth consecutive race with a blistering lap around the Baku street circuit in Azerbaijan on Saturday, but the Ferrari driver failed to convert any of his last three pole positions into victories.

Leclerc ran a lap at 1 minute, 41.359 seconds with his last run of the session to beat Sergio Pérez of Red Bull by .282 seconds. Formula One championship leader Max Verstappen qualified third in the other Red Bull, .347 off Leclerc's pace.

Leclerc has been first or second in every qualifying session this year, but has not won a race since the Australian Grand Prix in April. Verstappen won three consecutive races and Pérez won in Monaco two weeks ago.

“All pole positions feel good but this one, I probably did not expect it,” Leclerc said. He said Red Bull's cars seem faster “but then in the last lap everything came together.”

Leclerc started from pole the last three races but was passed by Verstappen in Miami, retired with car problems in Spain — where reigning champion Verstappen won to pass Leclerc for the standings lead — and dropped to fourth at his home race in Monaco after a botched strategy call by Ferrari. He was also on pole in Azerbaijan last year, when he finished fourth.

Pérez was the winner in Azerbaijan last year and is coming off his victory in the Monaco Grand Prix. He was upbeat about his chances in Sunday's race, but admitted he was lucky in qualifying after tapping the wall.

“I hit it quite hard a few times but it seems to be very strong, the car, this year,” he said. “I was lucky not to crash because I was over the limit a bit too much and just trying too much.”

Pérez argued he could have been faster if not for a problem getting his car started in the pits for the final qualifying run which left him on his own on the track, without a car to slipstream behind on the straight.

Verstappen, who leads Leclerc by nine points in the standings, felt his car was “consistently a bit off” in terms of setup balance.

“We seem to lack maybe a tiny bit over one lap, but I think over the long run our car should be quite good," he said. Like Leclerc, Verstappen has never been on the podium in Baku, and crashed from the lead last year when a tire blew.

The stewards summoned Hamilton and Lando Norris of McLaren for “driving unnecessarily slowly” during the second of the three qualifying sessions. Footage from Norris' onboard camera showed Hamilton driving slowly through the narrow Old City section of the track and Norris then slowing down to match him.

Hamilton said he'd acted within the rules and was trying to let other cars past to get a slipstream and make up for Mercedes' lack of pace on the straights. The stewards took no action, ruling Hamilton's actions weren't dangerous and his overall lap time was fast enough.

Norris narrowly missed the cut in the second session and qualified 11th, one spot ahead of embattled McLaren teammate Daniel Ricciardo.

Lance Stroll was 19th after crashing twice in the first session. The Canadian was able to get going again after running into a barrier when braking late, but hit the wall again on his very next lap, breaking the front wing and leaving one wheel dangling.