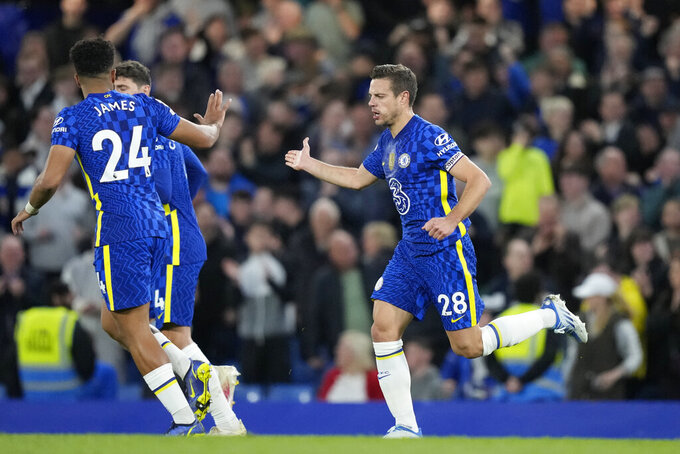 A long-standing fan of Arsenal, Hamilton has seized the opportunity to invest in its London rival as three bidders try to buy the Premier League club from sanctioned Russian owner Roman Abramovich.

Williams and Hamilton are part of a consortium that features proposed investment from Josh Harris and David Blitzer, the owners of the NBA's Philadelphia 76ers who would have to sell their stakes in Premier League club Crystal Palace to buy Chelsea.

The reigning world and European champions could be sold for 3 billion pounds ($4 billion) — a record in world sports — given the interest in the west London club.

Representatives for Hamilton said he planned to invest more than 10 million pounds ($13 million) in the bid being fronted by former Liverpool and British Airways chairman Martin Broughton and World Athletics president Sebastian Coe.

Another bid has seen Boston Celtics co-owner Steve Pagliuca partner with Larry Tanenbaum, who has ownership stakes in Toronto with the NBA’s Raptors, the NHL’s Maple Leafs and the city’s MLS team. Peter Guber, a part-owner of the Los Angeles Dodgers, is also backing in the group.

Another part-owner of the Dodgers, Todd Boehly, is leading another consortium hoping to be announced as the preferred bidder.

A New York-based merchant bank, the Raine Group, has been overseeing the sale process that was announced last month by Abramovich following Russia’s invasion of Ukraine. The oligarch has been sanctioned by Britain and the European Union over his links to Russian President Vladimir Putin with assets frozen, including Chelsea.

Abramovich has been disqualified from running Chelsea by the Premier League and he cannot profit from the proceeds of the sale, which the British government must approve under terms of a license that allows the team to continue operating.