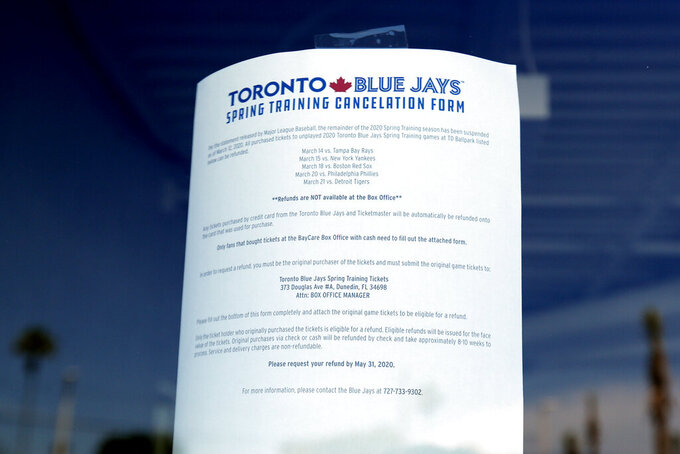 A sign announcing the suspension of spring training is displayed in the ticket window at TD Ballpark, Friday, March 13, 2020 in Dunedin, Fla. Major League Baseball has suspended the rest of its spring training game schedule because if the coronavirus outbreak. MLB is also delaying the start of its regular season by at least two weeks. (AP Photo/Carlos Osorio)

The shock waves from the coronavirus outbreak rattled sports for another day as two rites of spring, the Masters and Boston Marathon, were postponed.

There was at least some relief Friday that those events are expected to take place later in the year, unlike the stunning announcement the day before that the NCAA was canceling March Madness, one of the biggest events on the U.S. sports calendar.

Golf and car racing came around and called off weekend events, leaving fans with nothing to look forward to for several weeks.

Augusta National offered no details for when the green jacket will be slipped over the shoulders of a new champion, except for Chairman Fred Ridley saying he hopes the postponement puts the club in the best position to safely host the Masters "at some later date.”

The Masters had been scheduled for April 9-12.

The Boston Marathon, the world's most celebrated footrace, was postponed from April 20 until Sept. 14.

Mayor Marty Walsh announced the decision. The Boston Athletic Association, which oversees the marathon, had held off deciding the fate of the race even as other high-profile sports events were canceled or postponed around the globe.

But pressure had mounted in recent weeks from officials in Boston and the seven cities and towns along the course. Some had expressed worries not only for the health of the 31,000 registered runners but also the estimated 1 million spectators who traditionally line the route, giving athletes hand slaps and even kisses as they pass.

Walsh drew on the city’s rallying cry in the aftermath of the bombings that killed three and injured scores of others at the marathon finish line in 2013.

“We’ve shown before that whatever the challenge to our marathon and to our city, we are Boston Strong," he said. “The marathon is Boston. It connects us. It reflects us. It brings out our community spirit and our resiliency."

The Boston Marathon has never been canceled outright since its first running in 1897, though there was a de facto cancellation in 1918, when the end of World War I and a global influenza pandemic prompted organizers to switch to a relay race format.

Until Friday, not even the Great Depression or ferocious storms had interrupted the 124-year-old race, a bucket list quest for runners worldwide. About a third of this year's runners were from outside the U.S.

They were still stunning, though, as they left fans facing an empty sports calendar for some time.

NASCAR and IndyCar reversed course and pulled the plug on racing this weekend, with IndyCar also suspending its season through the end of April/

NASCAR called off Sunday's race at Atlanta Motor Speedway and next weekend's events at Homestead-Miami Speedway. Both events were already scheduled to be run without spectators.

IndyCar was scheduled to open its season Sunday on the streets of downtown St. Petersburg without fans. Formula One also canceled its season opening race in Australia, leaving the first full weekend of global motorsports without a major event.

If IndyCar resumes in May, the season would begin at Indianapolis Motor Speedway first with a race on the road course and then the showcase Indianapolis 500 on Memorial Day weekend.

“Anything from this point is going to be strange, right now is strange,” five-time IndyCar champion Scott Dixon said. “I think that would be a fantastic start because that would mean everything is moving in the right direction, but we don't even know that now. Hopefully we are racing by then.”

The NBA and NHL have suspended their seasons indefinitely. Major League Baseball has postponed the start of its season. Colleges have canceled spring sports.

The final three rounds of The Players Championship were canceled after the first round was played without fans.

Major league baseball encouraged players to go home, a day after canceling the rest of the spring training schedule and postponing opening day by at least two weeks.

Ballparks in Florida and Arizona were locked down as the sport considered how to proceed. Teams speculated the season might not start until sometime in May, necessitating a reduced schedule.

Many teams said they planned to close for the weekend and re-open camps Monday. Commissioner Rob Manfred met Friday with the players' association leadership, and a decision was made to encourage players to leave camp in the afternoon.

“We don't have a playbook for this," Cleveland Indians President Chris Antonetti said. "We are learning on the fly. We are taking the approach that we will continue to prioritize the health and wellness of our players, our staff, their families, everyone at the complex, everyone throughout the organization. That is evolving day to day.”

College basketball players and coaches from Siena to San Diego State — which finished 30-2 and might have been a No. 1 seed for the first time — were left wondering, what if.

Siena won the Metro Atlantic Athletic Conference regular-season title and was crowned champion of the conference tournament after the league halted play because of the coronavirus pandemic.

Siena hasn’t played in the NCAA Tournament in a decade.

“It’s tough,” said Carmen Maciariello, the first-year coach at his alma mater in Loudonville, New York. “I think you can always look at it as a teaching moment. When you have a group of guys like we had and kind of the journey we’ve been on this season, the joy is in the journey. I truly believe we were on the brink of doing something extraordinary, especially as a first-time head coach, to have these guys believe in me just makes it hard. To ... have it evaporate before your eyes is really hard.

“When it’s all said and done, it is for the greater good and you want to make sure everybody is safe,” he said Friday. “People are dying, so we have to be mindful of that. There’s always a bigger picture.”