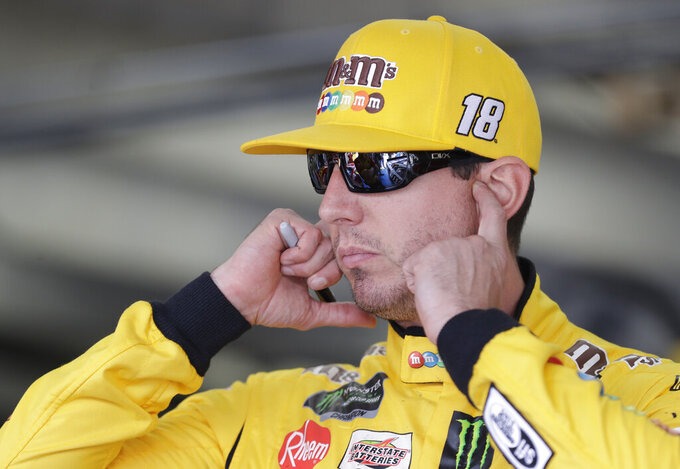 Kyle Busch covers his ears as he looks out of the garage before practice for Sunday's NASCAR Coca-Cola 600 Cup series auto race at Charlotte Motor Speedway in Concord, N.C., Thursday, May 23, 2019. (AP Photo/Chuck Burton)

CONCORD, N.C. (AP) — With a furrowed brow NASCAR legend Darrell Waltrip scoffed at the notion that the Coca-Cola 600 race is too long and should be shortened by, say, maybe a hundred miles or so.

"Is that what some thirty-something said?" the 72-year-old Waltrip said to The Associated Press.

It was 38-year-old Denny Hamlin who recently suggested that NASCAR should shorten its longest race because nobody — at least not the friends that he knows — wants to sit and watch stock cars race around an oval 400 times for nearly five hours.

But Waltrip, a five-time winner of the Coca-Cola 600, said that would be a mistake.

"It's a tough race, it's a grueling race," Waltrip said. "It takes a long time to run this race. But it's iconic. It's the only one we have. Our sport is definitely in a tailspin if we ever do away with the Coke 600, I will tell you that."

Waltrip is getting plenty of support in the garage.

Joey Logano said he gets a little angry when people suggest the race many refer to as the crown jewel of NASCAR should be shortened, saying to him it's a no brainer to keep the race length.

"This is a special race, this is the Coca-Cola 600," Logano said. "It has been around for a very long time. Yeah, you keep it. That is what it makes it so special, what makes it so unique. Does every other race need to be 500 miles, probably not? But certain ones, the iconic ones, need to stay."

NASCAR has shortened some races, including at Pocono.

But to defending champion Kyle Busch, changing the 600 wouldn't be right.

"I think it brings a different aspect to our sport — it's longevity," Busch said. "People will say, 'It's too long. It's boring.' Whatever. Well, you know, it's a part of the product and history that we've had on Memorial Day weekend for a long time that you run the extra hundred miles."

While Hamlin would be just as happy winning a Coca-Cola 300, others disagree.

Brad Keselowski said the race honors the tradition of the sport. The race began in 1961, growing into a Memorial Day tradition at Charlotte Motor Speedway and a celebration of those who served in the military.

"This race is a different challenge than anything else we have — and by a good bit," Keselowski said. "I appreciate so much about this race. I appreciate that you are going to go through the daytime and be burning hot and the car is going be out of control. Then we are going to transition to nighttime and the cars are going to be just crazy fast. I think that is tremendous."

Keselowski also said the race pushes the limits of a vehicle, specific to performance and endurance.

But critics would argue that in today's world of improved technology cars have gotten stronger. The attrition rate in the Coca-Cola 600 is at an all-time low, erasing the antiquated idea of this being the ultimate test of man and machine. Three cars didn't finish the race last year because of engine issues, which isn't all that unusual for the average 500-mile race.

One thing everyone can agree on — the race is a grind.

Keselowski said the biggest advice he would give young drivers is to "drink water."

And Sunday is expected to be no exception, with temperatures likely reaching the mid-90s in the late afternoon when a heatwave hits the Carolinas.

The 21-year-old William Byron will start on the pole for the Coca-Cola 600 on Sunday and the Charlotte kid is looking for his first win on a track where he grew up watching NASCAR's longest race.

"I loved it as a kid," said 21-year-old driver William Byron. "I came to this race every year since 2004 or so. It was a great race. Obviously it was long, but I appreciated that because there was so much strategy and so much survival involved in it. You knew the guys who won this race were a big deal. The best cars and the best drivers always won this race."

Keselowski agreed. He thinks shortening it wouldn't be right.

"It seems like for whatever reason over the last couple of years that question keeps coming more and more. I have resisted so much because of how much respect I have for this race," Keselowski said. "And I would hate to see that change."