NASCAR execs give friendly wave around to fans at Daytona 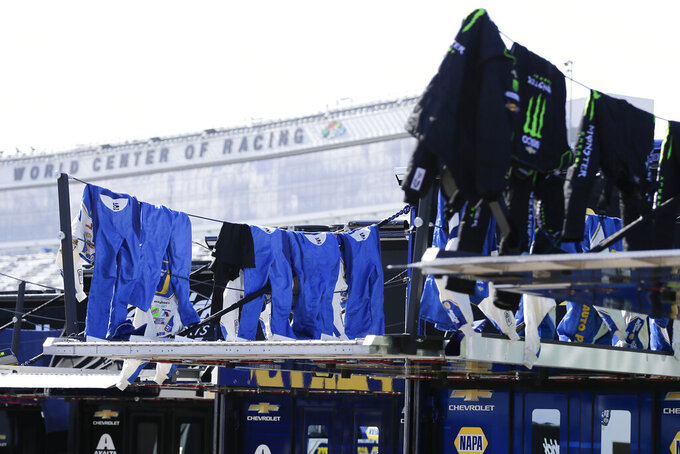 Crew members' fire suits dry out in the garage area before the restart of the NASCAR Daytona 500 auto race at Daytona International Speedway, Monday, Feb. 17, 2020, in Daytona Beach, Fla. Sunday's race was postponed because of rain. (AP Photo/Terry Renna)

Seven NASCAR executives were stationed at entrances around Daytona International Speedway on Monday to welcome fans back to the rain-postponed Daytona 500.

Lesa France Kennedy, the granddaughter of NASCAR's founder, and NASCAR chief operating officer Steve Phelps were among those greeting fans.

It was a clear attempt at apologizing a day after rain dampened the 62nd running of “The Great American Race.”

Some also may have been duped into staying at the track when NASCAR called for cars to be uncovered and drivers to return to them despite weather radars showing storms bearing down on Daytona. Minutes after those commands, the sky opened up again, as predicted, and flooded the track. That sent fans scrambling for cover and cars while drivers and crews headed back to their haulers.

Firesuits, gloves and shoes were among the crew items drying in the sun Monday, making areas of the garage look more like backyard laundry lines.

Crew members got caught in a heavy downpour minutes before NASCAR postponed the race Sunday night. It drenched their uniforms. While some might think that would mean a trip to the laundry mat, each suit takes up an entire dryer and would make for a tedious task and hours of extra work. It was a better job left to the sun, which was out and in full effect at Daytona on Monday.

Crews hung them everywhere to catch some rays. They were scattered along fences, draped over tire towers and hanging from haulers.

More than 11 million viewers tuned in to Fox Sports to watch President Donald Trump give the command for drivers to start their engines. The network said it was a 32% increase from the start of last year's race and the best overnight ratings since 2015.

The teardown inside the garage started early Monday when teams ripped off signs of drivers' names above stalls and gave them to fans. Walter Goulet, of Massachusetts, said he raced against Daytona 500 driver Ryan Preece in quarter midgets and went to his No. 37 Chevrolet stall to snag a souvenir.

"I just walked over, pointed at the window and they said go ahead and take it," he said. "They didn't need it anymore."

Goulet gave the sign to a family friend, a little girl named Sophie Letourneau who proudly held the sign that was taller than her.

Bojangles had race fans crying fowl after the fast food chicken truck did not return to the infield fan zone for the Daytona 500.

Daytona 500 driver Timmy Hill wandered into the Daytona media center looking for a drink during a rain delay Sunday. Hill did have a bag of Bojangles fries, but the stand had already run out of chicken roughly 20 laps into the race. The truck said only fries were available and decided to shake a leg and bail early when the race resumed Monday.

"Thanks for allowing me to stop by. I appreciate all the food," Hill said, after trading his fast car for fast food.