NASCAR putting its safety plan to test as racing restarts 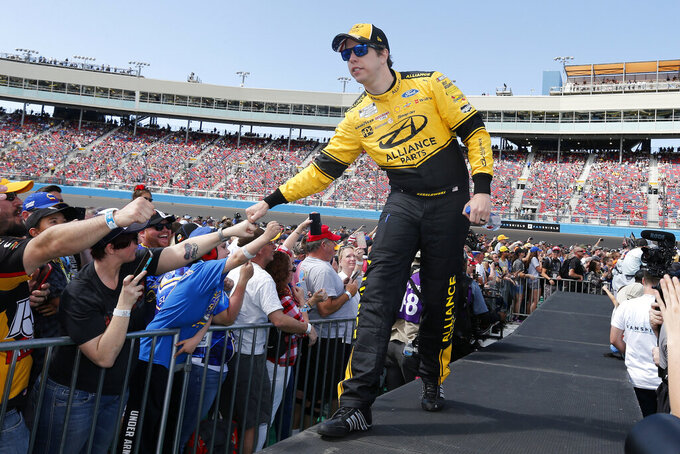 This March 8, 2020 photo shows Brad Keselowski during driver introductions prior to the NASCAR Cup Series auto race at Phoenix Raceway in Avondale, Ariz. Keselowski will start on the pole when the NASCAR season resumes Sunday, May 17, 2020 in Darlington, S.C. The 2012 Cup champion earned the top starting spot through a random draw. (AP Photo/Ralph Freso)

CHARLOTTE, N.C. (AP) — Crew chief Chad Knaus won't get a look at the car Hendrick Motorsports built for Darlington Raceway until he gets to the track Sunday morning, a few hours before the race.

The return to racing for NASCAR has brought with it a set of safety protocols that will be strictly enforced at the track Sunday when the Cup Series goes racing for the first time in more than two months after a pandemic-forced hiatus. The stock car series can only trust competitors to follow the guidelines away from the track — and teams appear to have different interpretations.

“No face-to-face or contact with these guys whatsoever. Everything has been on (Zoom) team meetings,” said Knaus, a seven-time championship winning crew chief. "That’s the recommendation by NASCAR for the traveling teams to stay as isolated as they can and try to keep everybody at the race track as healthy as we can. That’s the protocol we put into place and that’s what we’ve been abiding by.”

Busch dropped by the Ganassi shop Thursday. He wanted a face-to-face meeting with crew chief Matt McCall before Darlington after two months of communicating via phone or computer.

“Just him and I, separated from the group," Busch said. "There's a shift change where the shop is empty for an hour, so it will be just him and I following (social) distancing.”

NASCAR reiterated its guidelines when asked for clarification.

“For a team to submit a participant to a roster, they must be symptom free for five days and not have been directly exposed to anyone with COVID-19,” NASCAR said. “We have made strong recommendations about operations in shops and responsible travel to the event.”

Teams are limited to 16 employees per car Sunday and that includes the driver, spotter and owner. More than half the team owners at the Cup Series level are over 65 years old and aren't expected to attend because they are considered at risk for the coronavirus.

Hall of Famer Richard Petty told his son, Kyle, in an NBC Sports interview he will miss a Darlington race for the first time since 1950 when “my dad wouldn't let me off school; school was starting the same day.”

Drivers were told to be at the track four hours ahead of the green flag Sunday. They will undergo a heath check including a temperature check, but no COVID-19 testing — a decision reached to ensure tests go elsehwere, not to NASCAR. The timing allows a backup driver to make the two-hour trip from the Charlotte area to Darlington if needed.

Once inside, drivers will be isolated in their motorhomes, away from their team, and wait to be called to the cars. Everyone will be required to wear a face mask, crews must maintain social distancing and high-fives, hugs and human contact are barred.

NASCAR has warned of fines as high as $50,000 for not following the rules at the track, where competitors are subject to random health screenings.

NASCAR has recommended anyone that travels to the track not return to their shop to work and not interact with other groups. It is designed to help NASCAR track details in the potential case of a positive test.

UFC, which returned last weekend in Florida without spectators, tested every fighter, judge, referee and other employees. One fighter and his two cornermen tested positive.

UFC prior to the fights put all the fighters and employees in one hotel in an attempt to quarantine them, but NASCAR does not have that ability.

Series points leader Kevin Harvick owns a management company that represents UFC fighter Donald Cerronne, who competed in Florida last week. Harvick is comfortable going back to the track, where drivers will be isolated in their cockpits and crews are already clad in firesuits, gloves, helmets and now a required face sock.

“Well, I’m not going to get punched in the face by anybody else or be put in a headlock or be directly in contact with any of my other competitors," Harvick said. “When you look at the guidelines of entry and exit and temperature checks during the week and all the logs and things of where people are and who they have interaction with, I think we have done what we need to do from what fits our sport the best.”

NASCAR will use both of Darlington's garages and and an infield that will be missing thousands of fans to spread teams out and still create a tight footprint for essential personnel. NASCAR said representatives from IndyCar, the NFL's Carolina Panthers and possibly other teams planned to observe some of the procedures.

NASCAR cannot afford a misstep as it starts up its three series, with 20 races scheduled through June, all in Southern states and all without spectators. The industry is desperate to restart its revenue flow, but does not want to jeopardize the return of other professional leagues.