NASCAR reopens gates at Bristol with more tracks to follow 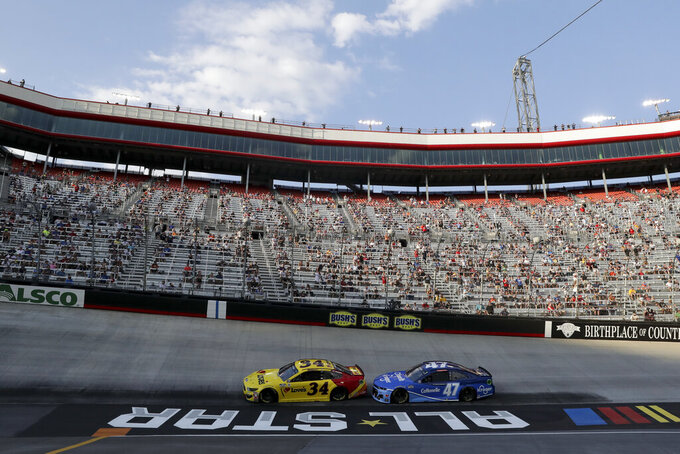 BRISTOL, Tenn. (AP) — Chase Elliott put his face mask on and went into the grandstands at Bristol Motor Speedway to watch the qualifying event before NASCAR's All-Star race, briefly becoming a part of the largest group of spectators at a U.S. sporting event since March.

Tennessee officials permitted Bristol to sell up to 30,000 tickets — less than 20% of its capacity of 140,000-plus — as NASCAR slowly begins to reopen the gates.

Texas Motor Speedway has the green light to admit up to 67,500 spectators on Sunday, but soaring summer temperatures are an expected deterrent to the track reaching 50% capacity. Iowa Speedway, which is owned by NASCAR, will allow up to 6,000 into its facility for IndyCar racing this weekend.

Elliott on Wednesday night won the $1 million All-Star race and celebrated by fist-bumping one of the many fans that surged to the fence as he collected the checkered flag. He'd been energized earlier in the evening as he discreetly sat in the stands along the back straightaway before the main event.

“I’m looking around, seeing all these kids and families, people wearing their respective drivers (merchandise),” Elliott said. "You don’t realize how much impact you have on people you never met, you never will meet, who genuinely want to see me do well and they don’t even know me. It’s pretty dang cool to experience that.

“I felt like I had a special night sitting up there with them watching that Open from the grandstands, really seeing and getting back to the roots of what this sport is built on. Then to engage with them after the race, to me it made it mean that much more.”

Speedway Motorsports, which owns Bristol, moved the All-Star race to Tennessee from Charlotte Motor Speedway because North Carolina would not permit spectators. The All-Star race debuted at Charlotte in 1985 and this year marked just the second time it was not held at that track.

Allowing the largest group of fans since the coronavirus pandemic shut down sports meant implementing health protocols for admission. There were no paper tickets given so fans used their phones for scanning at the gates. Tickets were still avaialble at the Tuesday evening deadline.

Masks were required to nter and suggested for high-traffic areas, but fans could remove them once in their seats. Sanitizer stations were located throughout the facility, as well as markers to indicate six feet of distance.

Because “The Last Great Colosseum" is shaped as a massive bowl, Bristol had the ability to socially distance spectators throughout the stands.

The event was not without glitches. Video from before the race showed a fan was able to climb the catchfence — typically an indicator of a lack of security. Some complained on social media that guidelines weren't being followed, bathrooms weren't cleaned and the event felt disorganized. Fans were supposed to be dismissed by row, but it appeared spectators poured out of the grandstands at will and into crowded parking lots that lacked organization for exiting.

Matt Harrington, who drove 2.5 hours from Greenville, South Carolina, for his first event at Bristol, said the track sent directions with times fans could enter and he didn't encounter a single person besides the person who scanned his ticket when he arrived. He said an instructional video on exiting procedures was useless because it couldn't be heard over the noise.

He also said his section of seats along the backstretch only separated groups of fans by one empty seat and concession stands were overcrowded.

“They did do a lot right, but it wasn't perfect,” said Harrington, 23. “With the way things are going on right now with the virus, you can't make mistakes, and they definitely missed it on leaving the track. Security, personnel, everything felt like it was at 25% operation.”

Harrington said it took more than 15 minutes to find help for a friend in need of medical assistance and the crowd leaving the stands after the race was overwhelming.

“I don't think I'd go back again this year,” he said. “I put too much trust in other people and really thought we'd be more spread out.”

New Orleans Saints running back Alvin Kamara had no complaints about his experience, tweeting “fans in the stands, felt great" and others shared the sentiment.

“The NASCAR All-Star Race has been a great example of what can happen when sports, government and community work together for the fans," said Speedway Motorsports CEO Marcus Smith.