No stress for defiant Hamilton, despite Verstappen pressure 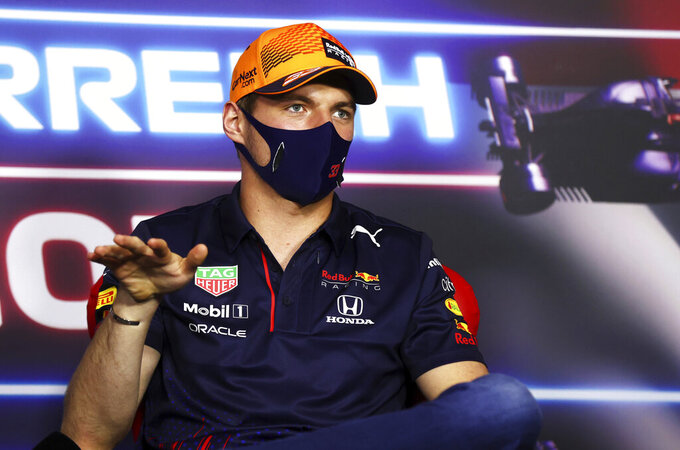 Red Bull driver Max Verstappen of the Netherlands attends a media conference ahead of the Austrian Formula One Grand Prix at the Red Bull Ring racetrack in Spielberg, Austria, Thursday, July 1, 2021. (Clive Rose/Pool Photo via AP)

SPIELBERG, Austria (AP) — With 15 races to go in the Formula One season it’s far too early for Lewis Hamilton to start stressing — even though the defending champion has not won one since May.

“I can’t get tied up and get into that negative bubble of worrying,” Hamilton said Thursday. “I’m just putting all my energy in to be(ing) the best prepared I can.”

Hamilton has not won since his record-extending 98th F1 win at the Spanish GP on May 9. Since then, he’s placed seventh, 15th and twice finished second to Red Bull’s Max Verstappen.

Verstappen leads the championship by 18 points from Hamilton, and edges Hamilton 4-3 in wins and 3-2 for pole positions.

It's rare to see Hamilton on the back foot in this way.

But the British veteran insists he is “not concerned as such” by Red Bull’s unexpectedly strong start, following years of Mercedes dominance.

“They’ve obviously done a great job; it’s been difficult for us (and) they have taken a step ahead of us,” he said at the Austrian GP. “But we’re not even halfway through the season, so we’re still fighting and chasing for this title.”

Hamilton needs one more F1 title to move past Michael Schumacher and stand alone with eight.

Many observers thought it would be somewhat of a formality, given his recent title successes.

It has proved rather complicated.

Mercedes also one eye on 2022, when a series of rule changes are set to shake up the series, and has held back on upgrading the car this year. That’s played into Red Bull’s hands so far, but Mercedes is at least planning to bring some upgrades to Austria.

“Everyone’s trying to figure out what more we can extract from the car, (and for) me to see what more I can eke out of the car,” Hamilton said. “Everyone’s working flat-out.”

At the Styrian GP last weekend, also held at Red Bull’s home track in Spielberg, Verstappen won from pole with almost consummate ease. Hamilton estimated that Red Bull was up to 0.4 seconds quicker on the straights.

“Of course, we’d love to have more pace," Hamilton said. “We’re discovering where we need to push more.”

With crowd restrictions being eased for sporting events, a lot of orange-clad Dutch fans will be in Austria to support Verstappen.

Hamilton knows what huge backing is like — he will get it at the British GP in two weeks’ time at Silverstone — so he has no issues with the raucous Dutch supporters.

“I’ve never noticed any hostility here. There was one time where some fans were a bit negative on the podium,” Hamilton said. “But I just let that go over my head.”

Because Hamilton has found himself in the unusual role of hunting others, that’s given Red Bull’s Sergio Perez a firsthand glimpse of Hamilton’s race craft.

“The race I had with Hamilton — literally against him (the the Azerbaijan GP) — I was fortunate enough to see how good he is,” Perez said. “This definitely takes you to a new level.”

Perez’s only two F1 wins have come since he joined Red Bull late last season, and he sits third in the standings. The Mexican initially struggled in a faster car than at his previous team Racing Point but is finding form.

“I went to another extreme," Perez said. “It took me longer than expected to get up to speed, and I’m just getting better at it.”