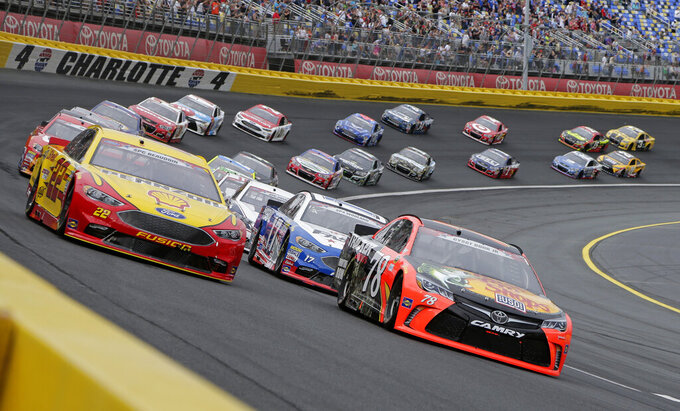 FILE - In this May 29, 2016, file photo, Martin Truex Jr (78) and Joey Logano (22) lead the field out of Turn 4 for the start of the NASCAR Sprint Cup series auto race at Charlotte Motor Speedway in Concord, N.C. The governor of North Carolina says NASCAR can go forward with the Coca-Cola 600 at Charlotte Motor Speedway at the end of May so long as health conditions do not deteriorate in the state. Gov. Roy Cooper said Tuesday, April 28, 2020, he and state public health officials have had discussions with NASCAR and the speedway regarding its safety protocols for staging a race without spectators. Cooper said the state offered input on NASCAR’s plan, but he believes the race can go forward on Memorial Day weekend for the 60th consecutive year. (AP Photo/Chuck Burton, File)

CHARLOTTE, N.C. (AP) — NASCAR can go forward with the Coca-Cola 600 at Charlotte Motor Speedway without fans in attendance at the end of May unless health conditions deteriorate in the state, the governor of North Carolina said Tuesday.

Gov. Roy Cooper said he and state public health officials have had discussions with NASCAR and the speedway located in Concord regarding safety protocols for staging the race. Cooper said the state offered input on NASCAR's plan, but he believes the race can go forward on Memorial Day weekend for the 60th consecutive year.

“We believe that unless health conditions go down, we believe we can hold the Coca-Cola 600,” Cooper said. “I think NASCAR will be making that announcement, but that’s what will happen.”

Marcus Smith, president and CEO of North Carolina-based Speedway Motorsports, thanked Cooper for working with Charlotte Motor Speedway "to get NASCAR back on track with the Coca-Cola 600 on Memorial Day weekend where it belongs.”

Cooper last week extended North Carolina’s stay-at-home order through May 8. Most teams are based in the Charlotte area and are expected to return to work this week as essential businesses.

NASCAR completed four of its 36 races before the season was suspended because of the coronavirus pandemic. The sanctioning body has vowed to run all 36 Cup Series races, although the schedule will change dramatically and some tracks likely will be dropped this season if their state does not permit a sporting event.

NASCAR has yet to publicly release its safety plans but is expected to limit team rosters, have one-day events, and scrap qualifying and practice at many places. A proposal to eliminate pit stops to reduce the number of team employees at the track has stalled.

South Carolina has said it will host a “spring” NASCAR race, while Florida and Texas have said NASCAR is welcome to compete without spectators. NASCAR for now is trying to schedule events only at tracks within driving distance to the Charlotte region so teams can get to a track, compete and return home in one day without needing air travel or hotel accommodations.

Darlington is owned by NASCAR, while Speedway Motorsports owns the Charlotte track. Because tracks will now likely host more events than originally scheduled, track operators will likely relinquish events at other venues to make the 36 races fit.

Eight events have been suspended, but NASCAR could have difficulty moving forward with some events, like the June race scheduled at Sonoma Raceway in California. That track is owned by Speedway Motorsports, which could shift Sonoma's date to another one of its properties.

That sort of shuffling is what NASCAR is working through now, as well as who can enter the track and how to socially distance the teams.

North Carolina House Speaker Tim Moore, one of the state lawmakers to initially petition Cooper to permit racing at Charlotte Motor Speedway, welcomed the return of NASCAR and praised the “Tar Heel spirit.”

“I appreciate this collaborative effort to help NASCAR run the Coca-Cola 600 and believe that this is an important step in bringing our economy back, bringing businesses back, and bringing exciting competitive events back to North Carolina,” he said.