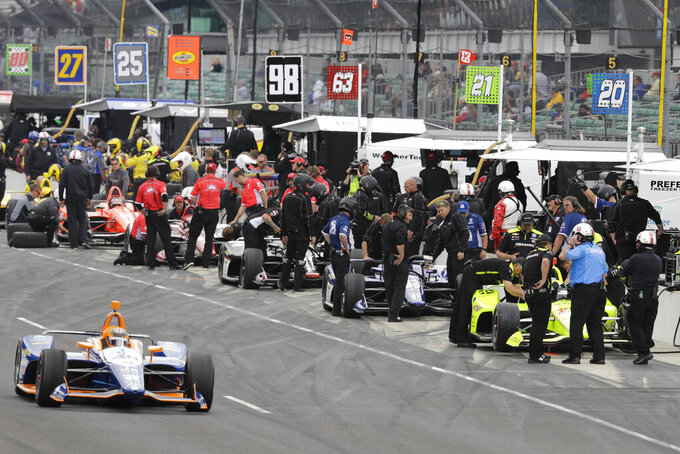 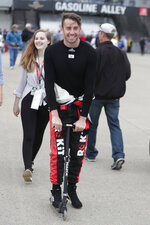 The Team Penske driver remained atop the speed chart for another day, this time in the second-to-last practice for Sunday's race. His fast lap of 228.441 mph in cool temperatures bettered that of teammate and 2017 series champion Josef Newgarden at 228.273.

"It was really good to be able to run with so many people on track," Pagenaud said. "It was almost like a race. The trick part is that it was so cold, every car looks good. You want to see how your car is, but you want to see how everyone else is, too."

Right now, Pagenaud has all the momentum.

After ending a 21-race winless streak by making it to victory lane in the IndyCar Grand Prix, he celebrated his 35th birthday with the third fastest four-lap qualifying average on Saturday, then returned to the 2.5-mile oval less than 24 hours later and became the first French driver to take the No. 1 starting spot in 100 years.

But if Monday proved anything to the 2016 series champ it was this: Expect things to be a lot different Sunday.

The gap appears to be closing between the Chevrolet engines that were so strong in practice and qualifications and Honda.

"Rossi was really strong at the end also and was really good in traffic, so he'll be a force to be reckoned with as usual," Pagenaud said. "I think Dixon will be strong as well."

One reason for the change is shifting strategies.

Many of the 33 drivers ran in large packs to see how the cars handled in traffic. Some teams worked on fuel mileage calculations while others swapped parts in and out on pit lane. Newer drivers worked on finding the proper braking zones along pit lane and at one point, 2013 Indy 500 champ Tony Kannan climbed out of his cockpit and into the car of teammate Matheus Leist to determine which setup might work best on race day for A.J. Foyt Enterprises.

It was an action-packed two hours for everyone.

"We're still trying to learn everything we can," Kanaan said. "We wanted to make a change that would be too much for one car only, so I jumped in his car to try it."

There also were some complications.

Dale Coyne's crew members scrambled to fix an electrical problem on the car of James Davison, and Marcus Ericsson's right-side tires tapped the outside wall between the third and fourth turns when traffic forced the rookie to take an unusually high racing line.

Both drivers have only one more chance to get it right — Carb Day on Friday.

What's unclear is how much this practice will actually help.

Temperatures barely made it into the 60s on an overcast day. Sunday's forecast calls for temperatures in the low 80s with significantly more humidity and a 40 percent chance of scattered thunderstorms.

"We chase the weather, we chase the race track and getting the balance right for 25 to 30 laps for a run, which is what we are doing today, is really critical for the race," said Mike Hull, managing director for Dixon's team, Chip Ganassi Racing.

One day after two-time Formula One champion Fernando Alonso failed to qualify, McLaren Racing's hospitality tent was locked shut with the televisions on and the privacy shield the team brought for the month remained outside two unoccupied garages.

Meanwhile, Kyle Kaiser, the Californian who sent Alonso packing, continued running the Juncos car without a primary sponsor after two companies pulled out last week. Though negotiations continue and rumors of a deal swirled around the track, no official announcement came before practice ended.

And two-time 500 winner Al Unser Jr. was arrested in nearby Avon, Indiana, and charged with operating a vehicle while intoxicated early Monday. He is a consultant with Harding Steinbrenner Racing, which fields the car for rookie Colton Herta.

"Al Jr. is loved by the racing community," series and speedway officials said in a joint statement. "Everyone at IndyCar and Indianapolis Motor Speedway is with him and his family and stand ready to provide the support he needs."