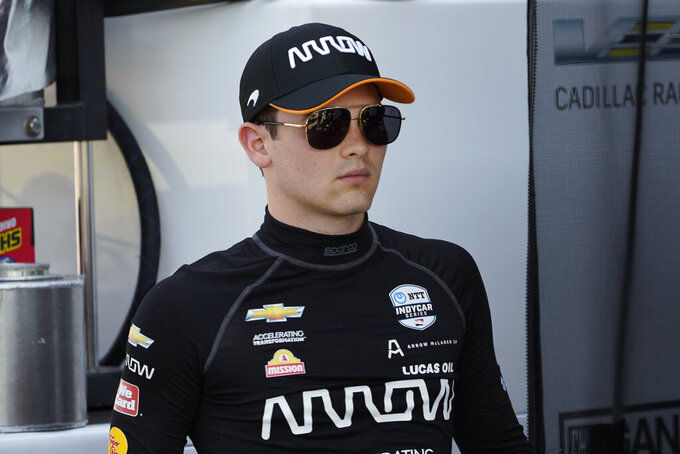 DETROIT (AP) — Alex Palou still felt the sting from his second-place finish in the Indianapolis 500 when he saw Helio Castroneves at the victory dinner and begged the winner to tell him how he made the decisive final pass.

“I asked him a couple of questions because I was in doubt if he was actually managing that pass or not, and he didn’t answer me, he just said ‘Hey, I have more experience than you,’” Palou said. “And I was ‘Like, man, just answer me, I just want to know.’”

He never got an answer and has since moved on to Detroit for a weekend doubleheader with a consolation prize: Palou is the current IndyCar points leader. He's got a 36-point advantage over his teammate, six-time and reigning champion Scott Dixon, behind a win and three podium finishes through six races.

The Spaniard opened his first season with Chip Ganassi Racing — it is his second season in IndyCar — with his first career victory. The win at Barber Motorsports Park in Alabama ignited a youth movement in IndyCar, which has four winners aged 24 (Palou) or younger and three first-time winners.

Palou has been like a sponge, and Kanaan both likened him to the late Dan Wheldon but also called him the best teammate Dixon has had since Franchitti retired after the 2013 season. Kanaan, it should be noted, spent four seasons in Palou's car.

“Tony has been a really big help for me personally since the beginning,” Palou said. “I actually bought lunch one day because I just wanted to take a notebook and just ask him all the stupid questions I had, just because having the opportunity of being able to ask a champion like Tony and an experienced driver like him everything, it’s amazing.”

Palou is one of seven drivers racing for the first time at the Raceway at Belle Isle Park, a 2.35-mile, 14-turn temporary street course. The race was canceled last year because of the pandemic so the circuit is new to nearly a third of the field for the Saturday and Sunday doubleheader.

It's a bumpy course and IndyCar allowed just one 75-minute practice Friday for teams to prepare. Palou also will drop six spots on the starting grid ahead of Saturday's race as penalty for an unapproved engine change during Indianapolis 500 preparations.

But Palou has felt extremely comfortable in his move to Ganassi and is looking forward to a championship fight.

“When you have a really good team around you, everything feels like it’s going easier,” he said. “The teams, they always nail the pit stops, they always nail the strategy. They put me out there and I just have to do my job and drive it. There’s been a couple of races where we had the best car, we’ve been doing a good job, but it’s because they give me the tools and I just try to not (screw) it up.”

Santino Ferrucci turned his sixth-place finish in the Indy 500 into another chance with Rahal Letterman Lanigan Racing, which brought Ferrucci to Detroit for the doubleheader.

IndyCar also welcomed back Jimmie Johnson and Romain Grosjean, who sat out the Indy 500 because both drivers have committed only to road and street courses. Both have since had a change of heart, with Grosjean planning to race the oval at Gateway outside St. Louis in August and Johnson now planning to at least test an oval.

“We’re going to have some pretty high-intensity action here at Detroit,” said veteran Conor Daly. “Our favorite marketing partners Jimmie Johnson and Romain Grosjean will be back in action, as well. Can’t wait for those guys to be back.”

Johnson and Grosjean, as well as fellow rookie Scott McLaughlin, all spun during Friday's practice. McLaughlin spun in the first five minutes and caused enough damage to end his session.

He punched his hand on a barrier as he watched his car get hooked to a tow truck.

“I just got a little too excited," he said of his spin. "Rookie mistake, stupid mistake. It’s a practice we really needed. I’m pretty upset with myself.”

Johnson said he was “floored” by how technical the track is and that all his work on the simulator still did not have him prepared.

“How rough it is, how little grip there is, and I've got a huge challenge this weekend,” Johnson said.

Helio Castroneves is the first reigning Indianapolis 500 not to race the next IndyCar event on the schedule since Dan Wheldon in 2011.

Castroneves won his record-tying fourth Indy 500 last month in the first race of a six-race deal with Meyer Shank Racing. The team has not altered its plan with Castroneves after scoring its first ever IndyCar victory, and Castroneves will instead race Saturday night in Connecticut in the debut of the Superstar Racing Experience all-star series co-founded by Tony Stewart.

Roger Penske unofficially reopened America with the Indy 500, which at 135,000 spectators was the largest sporting event in the world since the start of the pandemic.

Now Penske is doing the same in Detroit, where just under 10,000 spectators will be permitted onto Belle Isle each day of the three-day race weekend. Penske is the promoter of the Belle Isle event.

Michigan has had some of the strictest regulations of any state during the pandemic and it was only on Tuesday that the Detroit Tigers said it would lift capacity restrictions. Comerica Park holds 41,000.