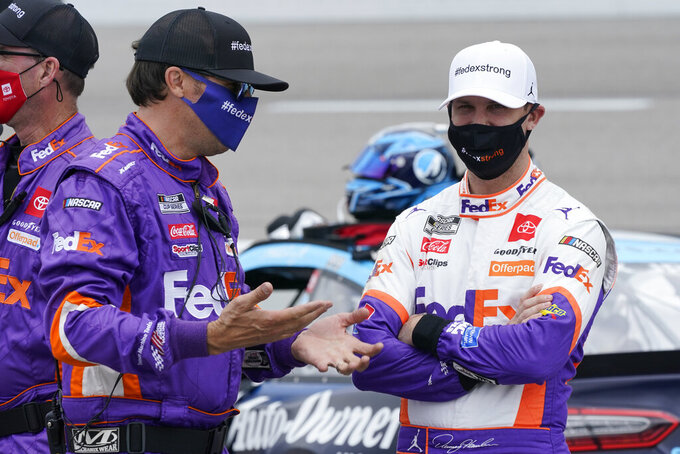 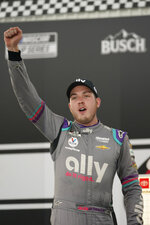 TALLADEGA, Ala. (AP) — Roger Penske doesn’t want a repeat of the Daytona 500, when teammates Joey Logano and Brad Keselowski took each other out racing for the win on the final lap.

Penske, owner of Team Penske, convened his drivers for a Zoom session ahead of Sunday’s Geico 500 at Talladega Superspeedway on the importance of balancing the collective good of the team with individuals’ competitive desires.

“Just trying to find the best way that if we are in a spot where we’re 1-2 coming to the end of this thing, how do we go about that?” said Ryan Blaney, who won at Talladega last June. “How do we go about to make sure and do our best that we finish 1-2, no matter who wins?”

It would be a nice problem to have at Talladega, which staged its longest and most caution-filled race last October.

Penske drivers have won seven of the last 11 Cup races at Talladega and typically have enjoyed success at Daytona, too.

But the most recent speedway memory is a sour one for Penske.

Blaney watched the finish from his couch after getting involved in a 16-car crash 14 laps into this year’s Daytona 500. The crash with Logano and Keselowski helped open the door for 100-to-1 long shot Michael McDowell to win.

Another Penske car, driven by rookie Austin Cindric, was also destroyed in the organization's disastrous race.

Penske spoke individually to his drivers in the aftermath and collectively too. He knows tensions can escalate in the heat of the moment as they did at Daytona. But he said he wants them to remember that everyone from the crew to the sponsors, and of course the drivers, can lose in those situations.

“I don’t think there’s anything new that will happen, but I think we just have to make an agreement on just exactly how you want to play ball if you get into that same situation as we had with two of us running as well as we had with a half-mile to go, and then end up with three cars in the trash bucket,” Penske said.

“But that’s what you have to expect, unfortunately. It wasn’t a good day for us, obviously.”

At least one relationship seemed to be in good shape; Blaney was twice interrupted by calls from Logano during a Zoom session with reporters.

Now, it remains to be seen if the team unity holds up in, as Blaney says, “the heat of the battle.”

“Everyone wants to win,” he said. “Those things are tough, but I thought we had a really good discussion and hopefully we can apply the things we talked about and try to finish 1-2-3-4 or 1-2 or whatever it is, just try to get a Penske car to Victory Lane.”

Series points leader Denny Hamlin has six straight top-five finishes at superspeedways, including a triple-overtime win at Talladega last October in a race that saw 13 cautions.

Not only that but Hamlin, who will start up front, has a career-best eight straight top-five finishes. Only Hall of Famers Cale Yarborough (1974) and Darrell Waltrip (1979) have nine top-five finishes in the first 10 races of a season.

Hamlin, who has flirted with victory late only to fall short in each of the last three races, is the 7-1 favorite, with Logano next at 9-1. ... Defending series champion Chase Elliott is the only Hendrick Motorsports driver without a win so far. ... Eight drivers have won in the first nine races, with Martin Truex Jr. the only one with multiple victories. ... Keselowski leads active drivers with five Cup wins at Talladega, the latest in 2017. Logano has three 'Dega wins, Hamlin and Blaney two each. ... The all-electric Mustang Mach-E will serve as pace vehicle.