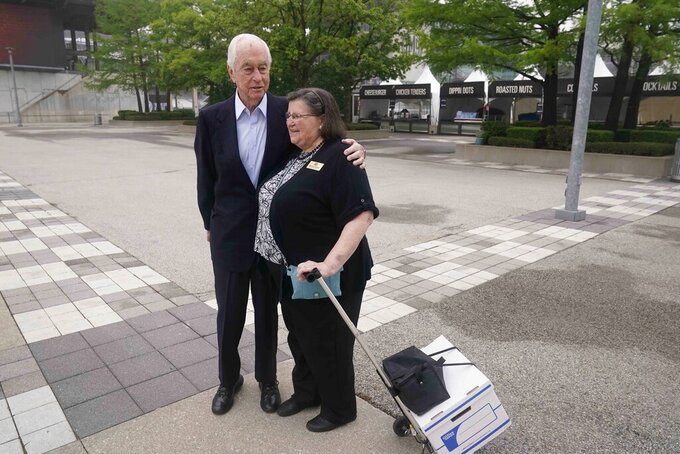 Roger Penske talks with Barbara Hellyer in the plaza before practice for the Indianapolis 500 auto race at Indianapolis Motor Speedway, Thursday, May 19, 2022, in Indianapolis. wld(AP Photo/Darron Cummings)

INDIANAPOLIS (AP) — Roger Penske motioned toward the turn four grandstands at Indianapolis Motor Speedway. His father took him to those seats in 1951 and a 14-year-old Penske was instantly hooked by the sights and the sounds of “The 500-Mile Sweepstakes,” won that day by Lee Wallard.

It was the beginning of a love affair between Penske and the speedway that produced 18 victories for the owner of Team Penske and, in 2019, the unexpected opportunity to purchase the national landmark.

Penske took ownership of Indianapolis Motor Speedway just two months before the pandemic closed the country, and only now, in his third Indianapolis 500 as promoter, can he throw open the gates and host more than 300,000 guests at “The Greatest Spectacle in Racing.”

“I hope my dad is looking down and saying, ’Son, you did a good job here,'” Penske told The Associated Press.

Penske's crowning moment comes Sunday when the hundreds of millions of dollars he's poured into sprawling venue will at last be on full display. His first Indy 500, pushed to August 2020 from its traditional Memorial Day weekend slot, was held in front of empty grandstands.

Penske was allowed to admit 40% capacity last year and welcomed approximately 150,000 guests in what then was the largest sporting event since the pandemic began. On Sunday, the crowd will be the largest since the sold-out 100th running of the Indy 500 in 2016, with late ticket sales trending closer to that threshold.

Penske would love a sellout. It would be a reward for the financial bloodbath he's taken since Tony George approached him on the starting grid ahead of the 2019 season finale and said the one thing Penske's money could never buy was now for sale.

Penske snapped up both IndyCar and the speedway that had been owned by the Hulman-George family since 1945; Greg Maffei, the CEO of Liberty Media, told AP that Penske outbid his company, which had completed its purcase of Formula One in 2017.

The pandemic has prevented Penske from turning any sort of profit — he's pumped more than $30 million beyond the purchase price into bringing the speedway grounds up to his standards — and despite operating in the red, Penske has no regrets.

“We had a business plan and we were counting on over 200,000 people at our first 500," Penske told AP. “But I look forward, I can't look back. You don't get any credit for what you did last year. I'd do the same deal again. I'm fully engaged."

Penske is now 85, and on Wednesday, a drizzly day off at the speedway before the festivities get into full swing, “The Captain” was surveying every corner of the media center with a maintenance worker taking notes as he trailed behind. As Penske walked through the Pagoda Plaza, he called over to the man polishing the Chevrolet Corvette pace cars on display.

“Hey, Joe, thanks!” yelled Penske. “Those are your cars. Treat them like they are yours."

Doug Boles, the president of IMS, said Penske has been working triple-time to prepare for Sunday. Staffers are accustomed to receiving calls at all hours of the day — even an unexpected office drop-in — as Penske wants the facility perfect.

“Roger is an unbelievably focused person on details and execution,” Boles said. “He has been an amazing steward through an unbelievably difficult time that he didn't know he was going to get when he bought the speedway. He's never complained. He used an opportunity when this place was closed during the pandemic to make this place better and it energizes everyone because he's an energized leader.”

Penske refers to the fans who will begin pouring through the gates on Friday's “Carb Day” as his “guests.” Every initiative is done to create a pleasant experience for those attending a Penske party.

“He doesn't look at the speedway purely as a balance sheet,” said three-time Indy 500 winner Dario Franchitti. “He sees this as a treasured property that he'll do anything to protect.”

Penske is also aware of evolving technology, changing times and a new generation of fans. A year ago, he backed the effort of an all-female team to ensure a woman was in the 2021 field, and he's currently supporting both Ernie Francis Jr. and Myles Rowe in lower divisions in Penske's quest to get a Black driver into the Indy 500 field.

Sustainability initiatives have been taken to make the 500 a more environmentally friendly event, and the Snake Pit party zone in the infield returns for the first time since 2019 with musical acts geared toward a younger demographic.

“Roger has a great balance of understanding how do you protect the history and tradition of the speedway — the things that were special to him when he first came here in 1951 — but also a great understanding that if we are going to continue generations beyond ours, we have to begin changes," Boles said. "We have to lead in a way that's going to get 25-year-olds excited about the Indianapolis 500."

This Friday marks the 50th anniversary of Penske's first Indy 500 victory as a car owner. Mark Donohue picked up the first of Penske's 18 Baby Borg trophies, and that record number is displayed outside the Pagoda; Penske's spot isn't marked by his name, just the number 18.

“I am just so excited for him because I know how much he loves this place and he will always keep the best interests of this place at heart,” Rick Mears, who won all four of his Indy 500s driving for Penske, told AP. "After he bought this place, everyone felt so sorry for him because of the pandemic and not getting people in here. But Roger is always looking forward and he's sitting there thinking, ‘Well this gives me another year to get the place ready.’

“When a full crowd pours in here on race day, that's going to be one of the greatest moments of a very accomplished life.”