In The Pits: iRacing is fun but won't carry teams for long 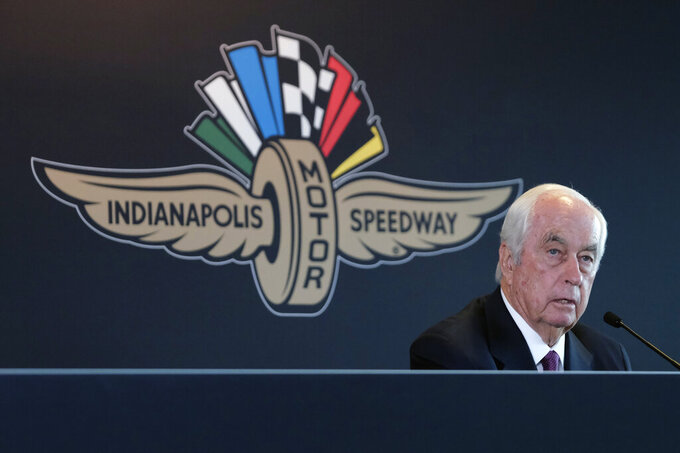 FILE - In this Monday, Nov. 4, 2019, file photo, Penske Corporation Chairman Roger Penske responds to a question during a press conference at Indianapolis Motor Speedway in Indianapolis. The Indianapolis 500 scheduled for May 24 has been postponed until August because of the coronavirus pandemic and won't run on Memorial Day weekend for the first time since 1946. The race will instead be held Aug. 23. It was an inevitable decision but still had to be difficult for Roger Penske. (AP Photo/AJ Mast, File)

CHARLOTTE, N.C. (AP) — Virtual racing has been the small saving grace for motorsports since the coronavirus pandemic brought nearly everything to a halt.

Timmy Hill's iRacing victory on national television gave the journeyman driver and his sponsors exposure they would never receive during a normal NASCAR weekend.

“What I'll gain from this is recognition. It's hard to get that recognition because of the level of competition that we are in real life,” said Hill, who at 27 has bounced around NASCAR’s three national series since 2011 before making his first Daytona 500 this year.

“We just don't have the money, the dollars, to compete at a high level. Every once in a while we'll get that big payday and we can really reinvest in our race team," he said. "This win will hopefully gain some recognition and attract more sponsors for us, maybe in the real world when we get back racing. Hopefully it will help me in the real world.”

The real world looks grim right now: Racing and revenue have come to a halt and it is unknown what the landscape will even look like when the crisis ends.

IndyCar suspended its season 48 hours before it was set to open, and last week new series owner Roger Penske made t he unprecedented decision to delay the Indianapolis 500 from Memorial Day weekend for the first time in its long and storied history.

Penske’s transportation business has been hit and he informed Penske Corp.’s 60,000 employees over the weekend that both he and the company president would forego their salaries while senior leadership be paid less. Roughly 50 employees from IndyCar and Indianapolis Motor Speedway were laid off.

NASCAR has so far cut salaries for its executives by 25% — that includes the presidents of tracks owned by NASCAR — and 20% for all other employees. Behind the scenes, NASCAR has crafted a schedule to accommodate the seven races already postponed, but series leaders have been hesitant to release details because everything is so fluid. NASCAR has officially suspended the season until May 9 at Martinsville Speedway in Virginia — a state that on Monday issued a stay-at-home order until June 10 or it is rescinded by executive order.

Senior NASCAR executives have consistently checked in with teams and discussed future scenarios, including the development of the Next Gen car that had been scheduled for a 2021 debut. A car meant to revolutionize the sport by improving the racing while cutting costs — a project the entire industry is deeply tied to — could be pushed back a year.

Teams are caught in financial limbo. Sponsors unsure when their logos will be seen at a race are withholding money needed to make payroll and meet operating expenses. Stay-at-home orders have left little to no work for race teams.

“Are we concerned about teams broadly and their financial health? Of course we are,” NASCAR President Steve Phelps has said.

There are very few team owners like Penske or Rick Hendrick, who have other businesses larger than their racing hobby. The bulk of the sport is composed of racers.

Chip Ganassi owns race teams that supply the bulk of his revenue, and when his sports car program ended last year he moved those employees to a third IndyCar team to avoid layoffs. Now he has five cars idled in two series. It’s the same all the way down the grid, for owners such as Jay Robinson, Carl Long, Rick Ware and The Gaunt Brothers, all teams who rely on racing as their primary business. They need to be back at the track.

All the uncertainty has teams reluctant to speak publicly. Most discussions are at the ownership level, with drivers and team members waiting and wondering what will happen next.

Penske put IndyCar’s team owners at ease by ensuring the first three payments from the series’ bonus program will be paid. He acknowledges revenue will be down and was hopeful race teams might qualify for assistance from the $2.2 trillion coronavirus relief bill.

“We're doing everything we can do to help (teams). They have no cost right now other than their people and whatever assets they might have,” Penske said. “But I don't think people should think that just the people on the top are going to be fine. I mean, we all have ongoing costs. And the larger the team is, the more cost you have. When the revenue begins to slow, you've got to make sure you make your adjustments.”

Race promoters are stuck with empty venues and no idea when their next event will be. Texas Motor Speedway President Eddie Gossage was a good sport Sunday during the iRacing event that was televised live on some Fox affiliates and nationwide on its cable channel. He used social media to treat the video game race as a real one because that's as close to the real thing anyone is going to get for some time.

Hill was nervous for Sunday's event, the second of six scheduled in a virtual series designed to keep fans engaged with the sport and its drivers. He practiced at least four hours a day on his simulator, which consists of an obsolete $300 wheel at a desk with a computer (Denny Hamlin won the first iRacing event in a rig he said cost upward of $40,000).

The racers have still found a way to race — IndyCar and IMSA have similar racing series up and running — and it's all they have for now.

“For me to actually beat these guys on a level playing field, it really feels good for my driving talents,” Hill said. "It's neat to beat up on these guys with these big, massive, expensive setups. I think for the viewers, it's neat for them because they can understand that they don't have to spend that huge dollar amount to get into iRacing.

“And I tell you what ... I knew a lot was on the line, a lot of people watching. The rush of emotions definitely feels just like a real race.”