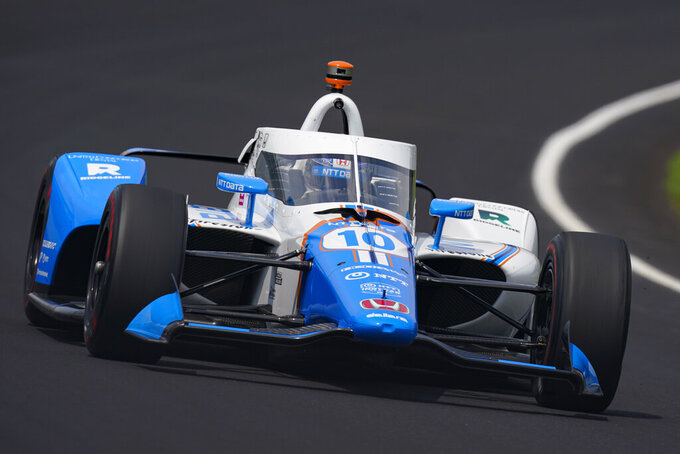 Alex Palou, of Spain, drives through the first turn during qualifications for the Indianapolis 500 auto race at Indianapolis Motor Speedway in Indianapolis, Saturday, May 21, 2022. (AP Photo/Michael Conroy)

He'd rather be winning.

The Spaniard was runner-up to Helio Castroneves in last year's Indianapolis 500 and returned to the 2.5-mile oval for Sunday's final day of qualifying and finished second again.

This time it was to his Chip Ganassi Racing teammate Scott Dixon.

Palou's four-lap average of 233.499 mph qualified him one spot below Dixon and he'll start next Sunday's race in the middle of the front row. Dixon produced the fastest pole-winning run in Indianapolis Motor Speedway history at 234.046.

“There was not a lot of nerves, like I knew he was going to get it. He’s the man here," Palou said. “My car was really good. I was super comfortable, I gave it everything I had. It's OK.”

The confident 25-year-old has wasted no time making his presence felt in IndyCar.

He reached the podium in his third career start with Dale Coyne Racing in 2020, followed that with a third-place finish on Indy's road course last May, and was last year's 500 runner-up en route to his first IndyCar championship.

He's been strong this year, too, ranking — what else? — second in points behind Australia's Will Power of Team Penske. Palou only lost the points lead a week ago when he went off course in the rain on Indy's road course.

But as Palou thrived at other venues, his performances at Indy largely have been defined by coming up short in some milestone moments.

Castroneves held off Palou's passing attempt on the second-to-last lap and beat him to the Yard of Bricks by 0.4928 seconds for his record-tying fourth 500 victory last May. That race has given Palou a different strategy for this week.

“It’s a long race. I know I was almost nowhere the first two runs last year and then all of a sudden we were up there,” Palou said. “So the target is to nail the first pit stop and then nail the second pit stop."

He certainly did his part to give Ganassi a strong shot. It's the first time the team owner has had cars in the first two starting spots since 2008 when Dixon beat the late Dan Wheldon for the pole and went on to capture his only 500 win.

This time on Indy's 2.5-mile oval, Dixon had the top seed and final run in the six-car shootout and jumped into the top spot of the fastest field in 500 history. Dixon broke a tie with four other drivers including Castroneves and A.J. Foyt for No. 2 all-time and trails only Rick Mears (six).

Instead, he watched Dixon's one incredibly quick lap seed after another appear on the video boards ringing the track. There was nothing Palou could do.

“I guess it would be different if it was another driver, but seeing those numbers was amazing," he said. “I thought my pole laps were fast, but not fast enough.”