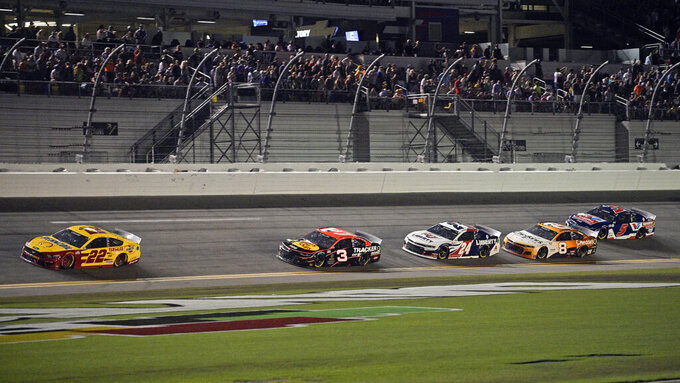 DAYTONA BEACH, Fla. (AP) — Tyler Reddick parked his taped-together Chevrolet on the backstretch, far from everyone else and quite possibly in the way of track workers trying to clean up a crash. He could smell burning oil and see smoke coming from under the hood.

Alone with his thoughts and genuinely concerned with his postseason chances, those few minutes of isolation at Daytona International Speedway could have been troubling for a 25-year-old driver with so little NASCAR experience.

Instead, Reddick turned them into a positive.

“It was nice in a way to sit back there and kind of reset on what we had to do,” Reddick said.

Reddick checked off a lengthy to-do list following that red-flag stoppage — most of it involving making sure his damaged No. 8 was in working order — and drove his way into the playoffs. Reddick finished fifth in the Cup Series regular-season finale Saturday night and secured the final spot in the 16-car postseason field.

He entered the weekend in the best position to earn that last berth. But more than a dozen other drivers, including Richard Childress Racing teammate Austin Dillon, could have ruined his season.

Several of them had a chance following the final restart. Ryan Blaney, though, who had already clinched a playoff spot, beat everyone to the checkered flag and lifted Reddick into the postseason.

Standing on pit road after a mild celebration with his RCR crew and his sponsors, Reddick looked up at the scoreboard and rattled off several guys who could have changed his fortune: Chris Buescher (who was later disqualified), Bubba Wallace, Ryan Newman and Ryan Preece.

“A lot happened in a matter of 30 minutes,” Reddick said. “Kind of emotionally just spent.”

Nonetheless, he reflected on everything that nearly went wrong in the 400-mile superspeedway race, none of it more heart-stopping than running into the back of Martin Truex Jr. late in the race and having to deal with damage the rest of the way.

“Going through this tonight is going to make us tougher and it’s going to make the challenge and the next bump in the road seem less small,” Reddick said.

He could have said the same about his season. Reddick improved 17 spots, from 28th to 11th, in points after a lackluster start to his second full-time Cup season. Now, though, he has five top-10 finishes in the last eight races.

He’s certainly not a title favorite heading to Darlington Raceway for the opening race in the first round. Regular-season champion Kyle Larson, steady but winless Denny Hamlin and reigning series champ Chase Elliott are the front-runners.

But Reddick shouldn’t be considered an afterthought, especially in the first round that includes three of his favorite tracks (Darlington, Richmond, Bristol).

“Now that everything’s kind of reset and a lot of 16th through at least 10th or eighth is really, really tight. I feel like a lot of those cars were around and a number of them are good, and on just our OK days, we’ve been able to run with and outperform. That excites me going into this first round, which is tracks I love.

“I feel like this was the huge mountain we had to get over to kind of being in the valley of the playoffs for a while. I’m just more excited than anything for this challenge ahead.”