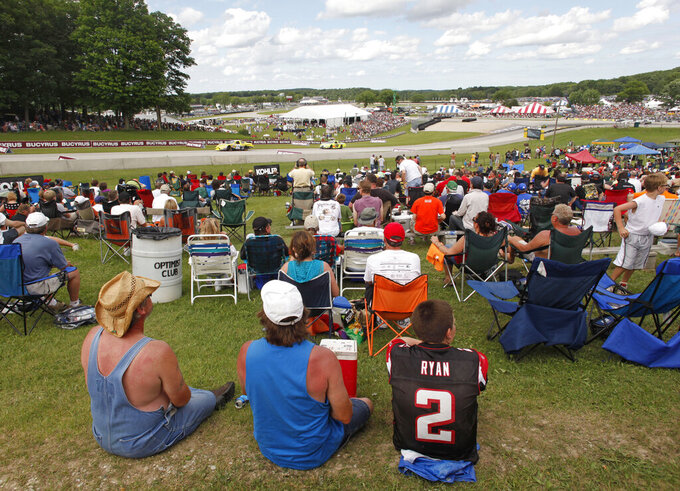 FILE - Fans watch the Bucyrus 200 NASCAR Nationwide series race at Road America in Elkhart Lake, Wi., in this Saturday, June, 19, 2010, file photo. For all its history, Road America only hosted NASCAR’s premier series once before, when Tim Flock won a rainy Grand National event back in 1956. That changes Sunday on the Fourth of July -- a coup for a facility that bills itself as “America’s national park for speed” but until this year couldn’t land a Cup date. (AP Photo/Jeffrey Phelps, File)

Road America owns a reputation as one of the nation’s foremost road courses yet hasn't hosted NASCAR's premier Cup Series since the 1950s.

That changes on the Fourth of July in a coup for a Wisconsin track that bills itself as “America’s national park of speed” but until this year couldn’t land a Cup date. NASCAR drivers can’t wait for the opportunity to race Sunday at Elkhart Lake.

“If I wasn’t driving that weekend, I would be going,” said Austin Cindric, who won last year’s Xfinity Series race at Road America and is competing in both the Xfinity and Cup events this time.

Road America, which opened in 1955, is located on 640 acres about halfway between Milwaukee and Green Bay. The course is just over 4 miles long, features 14 turns and is surrounded by about 1,600 campsites.

For all its history, Road America only hosted NASCAR’s premier series once before, when Tim Flock won a rainy Grand National event back in 1956. The track wanted the top series back but could not get one of the elusive 36 race dates.

“They only run so many races, and a good portion of those races are run on affiliate track that are owned by NASCAR,” Road America president/general manager Mike Kertscher said. “With us being an independent, that’s a different conversation, for sure. So the timing had to be right.”

Kertscher said Road America executives were “pretty deep in conversations” with NASCAR officials the year before the pandemic. He believes its ability to operate during the pandemic may have helped Road America earn a Cup Series date.

“I think last year, through COVID, we opened up a lot of eyes,” Kertscher said. “We ran all of our events last year in a safe way. We actually ended up with more events last year than we’d originally scheduled.”

Kertscher said Road America could get close to 100,000 spectators over NASCAR’s entire four-day run, part of a busy summer that saw the venue host IndyCar two weeks ago.

This year’s schedule has seven.

“I think having it on July 4th weekend, it just felt like such a natural fit to us,” NASCAR vice president of racing development Ben Kennedy said when the 2021 schedule was announced. “You think about everything that goes around, everything that’s synonymous with that weekend, camping, cooking out, really Americana.”

NASCAR officials also liked the unpredictability that Road America has provided since becoming a fixture on the Xfinity Series schedule in 2010. The track has produced 11 different winners in its 11 Xfinity races.

AJ Allmendinger, winner of the Xfinity race in 2013 and an open-wheel race in 2006, will be competing both Saturday and Sunday.

“I do think it’s just such a perfect race track for stock cars because there’s a lot of passing opportunities,” Allmendinger said. “It can be hard on tires, so tire wear become an issue, and that allows for more passing.”

Daytona 500 champion Michael McDowell said Road America has elements that distinguish it from most road courses.

“The rhythm is different at Road America than at a Watkins Glen or a Sonoma or a place like that,” said McDowell, who has five Xfinity starts at Road America and won there in 2016. “The layout in general has elements that are low speed and then elements that are really high speed, where Watkins Glen is just really high speed and Sonoma is really low speed. This has got a mix of both.”

Ross Chastain has competed in five Xfinity races at Road America but doesn’t necessarily believe that gives him an edge. He noted that simulators enable drivers without experience on a particular course to discover what to expect.

“It’s about just as good as taking a hauler and a race car up there and making laps in real life,” Chastain said. “Plus, it doesn’t hurt as bad when you wreck.”

Drivers who have never raced at Road America will learn in a hurry just what makes this course different. Tyler Reddick said the track “intimidated the daylights” out of him the first time he competed there.

“It’s a wild place and when you’re going to have the Cup Series there with the aggressive drivers that just like to sail it off into there in the corner, it’s going to create some great racing,” Reddick said.

Allmendinger believes the action outside the track also sets Road America apart. He says the greenery around the track and the sounds of the passing cars provide an ideal setting. When he’s at Road America, Allmendinger often walks around and sees the fans who have set up camp.

“Fourth of July weekend, that’s what you kind of want,” Allmendinger said. “You want that camping atmosphere. You want those brats, things like that, that smell. That’s what Fourth of July feels like, at least to me as a kid.”