Roger Penske to Indianapolis 500 fans: 'I wanted you here' 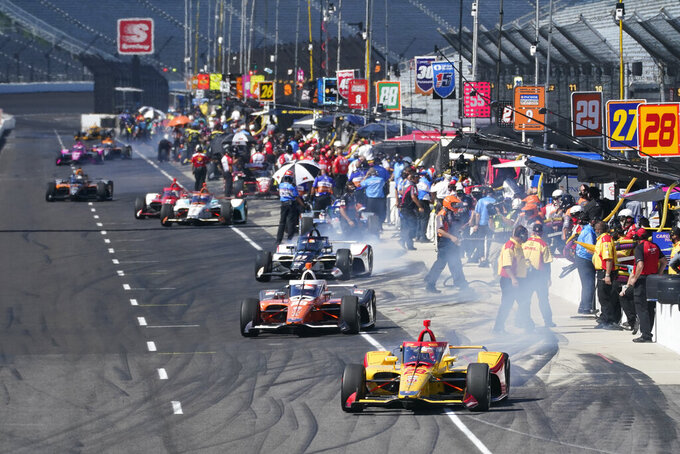 Ryan Hunter-Reay leads a group of cars off pit lane during a practice session for the Indianapolis 500 auto race at Indianapolis Motor Speedway, Sunday, Aug. 16, 2020, in Indianapolis. (AP Photo/Darron Cummings)

INDIANAPOLIS (AP) — Roger Penske will not pretend he is not disappointed he can't open the gates to spectators for his first Indianapolis 500 as steward of the iconic event.

Penske purchased Indianapolis Motor Speedway in January and spent an additional $15 million on capital improvements for an enhanced fan experience. He has had to close the sprawling facility to spectators because of the coronavirus pandemic. Without fans roaming the property and celebrating at downtown Indianapolis establishments, the buildup to Sunday's race has lacked the energy that elevates the Indy 500 into a world-class event.

Penske opened Thursday's media day for the field of 33 drivers by sending a letter to the Indianapolis fan base.

“I will miss you on Sunday,” the letter began. "I wanted you here. For Indianapolis and Indiana, in general, the Indy 500 means so much ... but given the rising number of COVID-19 cases in Marion County, running the race without fans was the right decision.”

The letter reiterated that Penske, just the fourth owner of the speedway, purchased the property for future Penske generations and that hosting the 104th running in front of empty grandstands protects the health of the fans and the future of the Indy 500. No admissions or concessions sales means the Indy 500 will be a massive money loss for Penske, but it has been canceled only twice, during World War I and World War II. It has never been held without spectators.

The financial losses for hosting an empty race and paying out some $7 million in prize money is the cost that comes with Penske's emotional attachment to the Indy 500. His teams have won the race a record 18 times, including the last two years.

His affection for the speedway was clear in the letter to fans as he noted his father first brought him to the race as a 14 year old in 1951. Penske was hooked.

“Lee Wallard won it. I was able to put on a helmet and sit in a race car. I’ll never forget that experience,” Penske wrote. "That special day shaped the rest of my life and made me who I am. It’s why I care so much about the Speedway and IndyCar racing. It’s why the fan experience will always be my top priority.

“Thank you for understanding, and I look forward to seeing you next May.”

Penske then signed off: “And drivers – start your engines.”

A look at some of the Indy 500 storylines:

How Big is Indy?

The seating capacity at Indianapolis Motor Speedway has always been just a guess at the largest venue in the world. As a privately-owned property, the late Tony Hulman and his family never disclosed how many seats are in the speedway.

In a virtual news conference with executives from IndyCar sponsor NTT Data, new track owner Penske said the facility has 232,000 permanent seats. He did not reveal how many fans fill the infield or watch from suites, but capacity for the Indy 500 is typically well over 300,000.

Fernando Alonso is making a third attempt at closing out the final leg of motorsports' version of the Triple Crown and Sunday's race could be his final appearance.

The two-time Formula One champion is returning to that series next year and team Renault has said the Spaniard cannot race Indianapolis while in that two-year contract. But Alonso reiterated he's chasing an elusive goal by racing the Indy 500 and, if he ever wins, there won't be any need to return.

"If you want me here again, wish that I don’t win on Sunday,” Alonso said Thursday.

Alonso won the Monaco Grand Prix in 2006 and 2007 for the first leg of the Triple Crown. He added back-to-back wins at the 24 Hours of Le Mans in 2018 and 2019 for the second leg, leaving the American classic as the only missing race.

Graham Hill is the only driver to win the Triple Crown, closing it with a win at Le Mans in 1972.

Alonso will start in the ninth row, between defending race winner Simon Pagenaud and James Davison after Honda dominated qualifying. The bulk of the Chevrolet drivers start deep in the field.

“I would never imagine starting next to Simon Pagenaud and Fernando Alonso on row nine,” Davison said. “Hey, 2020, I guess.”

Pranksters in the Paddock:

Alexander Rossi awoke in the speedway motorhome l ot to find a prankster had removed the tires from his golf cart and left it sitting on concrete blocks.

“The list of potential culprits can be extensive,” Rossi said. “But one thing is for certain, once I find out who it is, payback is going to be a painful lesson.”

Rossi teammate Zach Veach said the jack used to remove the tires had been left at his motorhome in an attempt to implicate him. But Veach said he would not have kept any evidence and shifted

J.R. Hildebrand has designed a helmet for the Indianapolis 500 that reflects on the national social and civil unrest over racial equality. He had decided on an all-black helmet for the event, then replaced his name with the message “RIGHTS. JUSTICE. OPPORTUNITY.” around the back.

Hildebrand said the unrest the past several months have led to reflection and the realization his experiences vary greatly from Black Americans.

“I'm incredibly proud to be born here and to be an American citizen,” Hildebrand said. "But at that same time, I recognize that not everyone here in this country has the same experience. We're here in August and everything is very strange right now. That's because of the things going on in the world that we just can't ignore.

“It's our job as Americans to make sure these things are experienced and accessed equally. I've definitely come to realize that's not currently the case and we've got some work to do.”

Message in a Bottle:

NBC Sports created a time capsule on Pagoda Plaza for the 33 drivers in Sunday's race to place a “message in a milk bottle” to capture their thoughts about this year's event.

A customized set of 33 lockers was placed on the plaza with an empty milk bottle inside. The drivers were provided with two questions — who are you racing for at this year’s Indy 500; why is this year’s Indy 500 special to you? — and the answers were sealed in the bottles.

The network will open the bottles before next year's race.