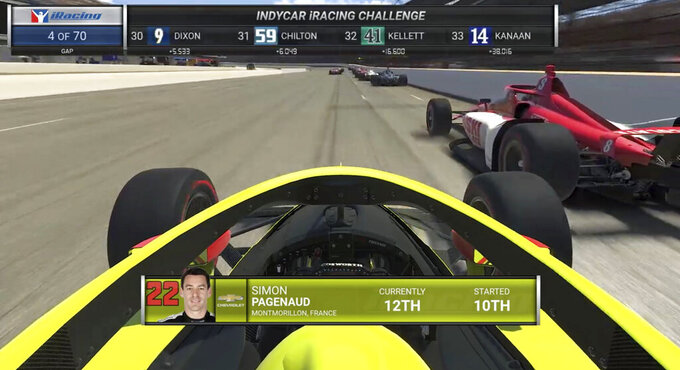 This image taken from video provided by iRacing IndyCar, shows the view of driver Simon Pagenaud during the First Responder 175 presented by GMR virtual IndyCar auto race at the Indianapolis Motor Speedway, Saturday, May 2, 2020, in Indianapolis, Ind. (iRacing IndyCar via AP)

CHARLOTTE, N.C. (AP) — Scott McLaughlin was supposed to leave Australia for Indianapolis this month to make his IndyCar debut on the road course at Indianapolis Motor Speedway.

With sports on hold because of the coronavirus pandemic, the two-time V8 SuperCars champion saw his IndyCar plans postponed.

McLaughlin instead settled for a virtual victory Saturday on the oval at Indianapolis Motor Speedway — his second win of IndyCar's iRacing six-race series — after a wild finish in which most of the leaders crashed as they rushed toward the checkered flag.

“Unbelievable,” McLaughlin said. “I was literally just hoping there was going to be a wreck at the end. I thought we were going to be third, and then the three wrecked and we won.”

McLaughlin celebrated in the seat of his simulator in Australia with a glass of cold milk, a nod to the traditional victory celebration at the Indianapolis 500. He declined to pour it over his head while sitting in his expensive rig.

Formula One driver Lando Norris, winner of last week's IndyCar virtual race, was headed for what appeared a 1-2-3 podium sweep for the Arrow McLaren SP entries on the final lap. But Norris ran into the back of Simon Pagenaud, a two-time iRacing winner and the defending Indy 500 champion, to take himself out of contention.

Then Oliver Askew and Pato O'Ward crashed, cars were sailing airborne and McLaughlin slid through the carnage to give Team Penske drivers their fourth win in the six-race series. McLaughlin and Pagenaud won twice, and Norris and Sage Karam were the other winners of this series created for content while IndyCar is on hold.

Conor Daly finished second and was followed by Santino Ferrucci, who figured there would be a lot of angry drivers after the 175-mile race.

“So many people are going to be salty over that,” Ferrucci said. “It’s a video game. Let’s try to have some fun.”

Daly, who has earned new fame through the iRacing series for his colorful commentary on his in-race stream, again delivered with one-liners and a humorous post-race speech.

“Quite a day on the internet today. It was an electric factory of a race. It was hilarious at the same time, I think we were involved in three accidents,” Daly said.

He then walked viewers through his setup from his Indianapolis home.

"I am sitting on one of four kitchen table chairs that is from downstairs. There is a mattress behind me, there's not really much room for a simulator. My pedals are currently being supported by a box with a big, full thing of batteries on top of it because that provided some extra weight and stability. So yeah, pretty technological setup here in the Conor Daly Tech Center.”

The field of 33 gave 29 guaranteed slots to full-time IndyCar competitors, plus Norris, McLaughlin and part-time series driver Sage Karam based on their victories in previous iRacing events.

The final four slots were determined Wednesday in a special qualifying session and went to Scott Speed, Stefan Wilson, James Davison and RC Enerson. Those who tried to make the race but did not were Robert Wickens, who had raced the past four iRacing rounds, and defending NASCAR Cup champion Kyle Busch, who finished 13th in his IndyCar iRacing debut.

Also absent from the field were fan favorite James Hinchcliffe as well as Kyle Kaiser, Felipe Nasr and Spencer Pigot, who had all participated in previous IndyCar iRacing events.