Some worry that White House briefings are a broken tradition 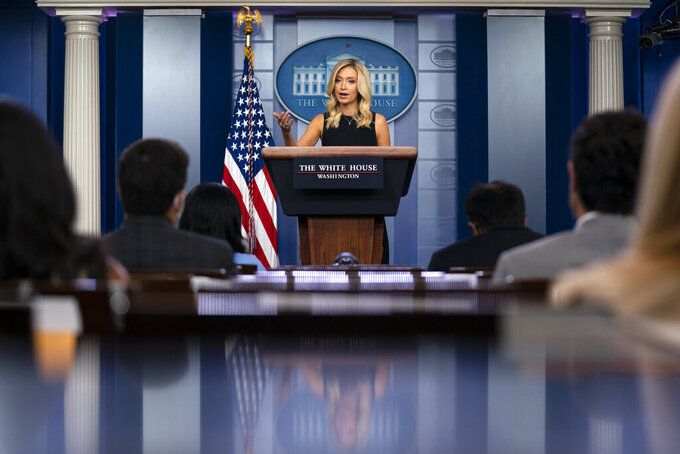 NEW YORK (AP) — A few times each week, reporters sit in the White House briefing room to fire questions at the Trump administration's press secretary as she stands at a podium to respond.

That visual, however, may be the only part of a time-honored government tradition that is familiar.

Under Kayleigh McEnany, the White House press briefing has become a streamlined, full-throated advertisement for a president facing re-election, a venue for attacks on the media and a forum relatively light on information about what government is doing.

ABC News' Jonathan Karl, whose term as White House Correspondents' Association president just ended, wrote in The Washington Post this month that he believed it is the White House press secretary's duty to hold briefings regularly, “but not like this.”

While McEnany sets the tone, it's naive to suggest she bears sole responsibility for what's become of an event that, for many Americans, is the primary window into what an administration is doing.

McEnany, President Donald Trump's fourth press secretary, restored the briefing after it was dormant for more than a year. She was appointed press secretary April 7 and gave her first briefing on May 1.

In many ways, she's the best Trump has had for the job. She's quick on her feet, smooth with answers and comfortable in front of cameras. The Harvard law school graduate has worked as an on-air commentator for CNN and a spokesperson for the Republican National Committee.

Her briefings start with an opening statement that usually has more to do with politics than government. On July 6, she reviewed the president's “two defining, unifying and patriotic speeches” over the holiday weekend. Five days earlier she declared Seattle “liberated” from the “radical left.”

“Democrats continue to put politics before peace while the president tries to restore law and order,” she said Monday.

The questions and answers with reporters — by their nature a combative exercise — allow McEnany to parry, fight back or deflect if it suits her purpose.

Exasperated by questions about the president's position on displaying the Confederate flag, prompted by a Trump tweet on NASCAR shortly before the July 6 briefing, McEnany said, “I'm not going to answer a question a sixth time.”

“You've been asked,” a reporter responded. “But you haven't answered.”

She keeps a briefing book handy to refer to past statements and stories. So, for example, when she was asked about Maryland Gov. Larry Hogan's criticism that states have been left to fend for themselves with the virus, she read quotes from March and April where the Republican governor had complimented Trump.

Following a reporter's question about the appropriateness of Trump giving a largely political speech from the Rose Garden, McEnany responded with first a deflection, then an attack.

The reporter said legality wasn't the point of the question when McEnany noted that the president was exempt from a law that restricts politicking on the job.

“Your real problem was ... the fact that the president gave a very good, very powerful speech from the Rose Garden,” McEnany retorted.

With a boss who routinely attacks the press, McEnany has no problems doing the same. She went after The New York Times twice in recent weeks, for reports on the coronavirus and on intelligence assessments that Russia paid bounties for killing American soldiers in Afghanistan.

The briefings are kept short, generally a half hour, and McEnany ends with a closing statement. This past week she reported that Ivanka Trump had distributed food boxes in Washington. Often she tugs at hearts: by citing an interview of a father whose 8-year-old daughter was shot, or reading the words of a girl whose father, a police officer, was killed.

“We'll be praying for you, Savannah,” she said before walking away from the July 13 briefing.

With a president whose words compel so much attention, the briefings are often light on news about administration policy. That's not purely McEnany's doing. Reporters are often focused on Trump's latest tweet or quote. The bulk of the July 6 session was dominated by questions about the NASCAR tweet.

And McEnany was undermined by the president when he contradicted what she said about how often he was tested for COVID-19. That damages her credibility with the press and public.

ABC's Karl, in an interview, said he spoke up because he's concerned about the briefings essentially becoming a political show.

“I didn't do this lightly,” he said. “I did it because I really believe that there is a danger that it will set a precedent for future press secretaries and future presidents. And it really cannot. This needs to be an aberration.”

Politics in the White House? It could be a line from “Casablanca”: “I'm shocked that there is politics going on in this establishment.”

But press secretaries are paid by the public, not by a party. Symbolically, a White House press secretary's office is midway between the Oval Office and press room, illustrating how the person is responsible to both occupants. McEnany did not respond to a request from The Associated Press to talk about the briefings.

Carl Cannon, a veteran Washington reporter who is now bureau chief for RealClearPolitics, said he found Mike McCurry, press secretary to President Bill Clinton, one of the best at balancing a press secretary’s two responsibilities — even though McCurry once called Cannon’s bosses to complain about him.

As aggravating as the give-and-take with reporters may be, part of a press secretary’s job is to remind a White House staff that the briefings are an important part of the democracy, McCurry said.

“It's an adversarial relationship by definition, but the obligation to ask and the obligation to answer should be sacrosanct,” McCurry said. “Can we spin from the podium at times? I sure did. But at the end, the public needs accurate and truthful information. It is in the public interest but it is also in the president's interest, a point I fear this president and staff just does not get.”

Mark Grabowski, an Adelphi University professor who occasionally writes columns from a conservative viewpoint for the Washington Examiner, said that while Trump has been hostile to the press, “I also don't think they've treated him very favorably or even fairly.”

“Both sides are to blame,” he said. “It's a broken relationship.”

Even with his discontent about how the briefings are managed now, Karl said he's never considered boycotting them in protest. It's his job, and he realizes his seat will quickly be filled by someone else.

“Even if we don't get an answer,” he said, “there is something revealed in the lack of responsiveness.”