Trip with Gordon paid dividends for Byron at Martinsville 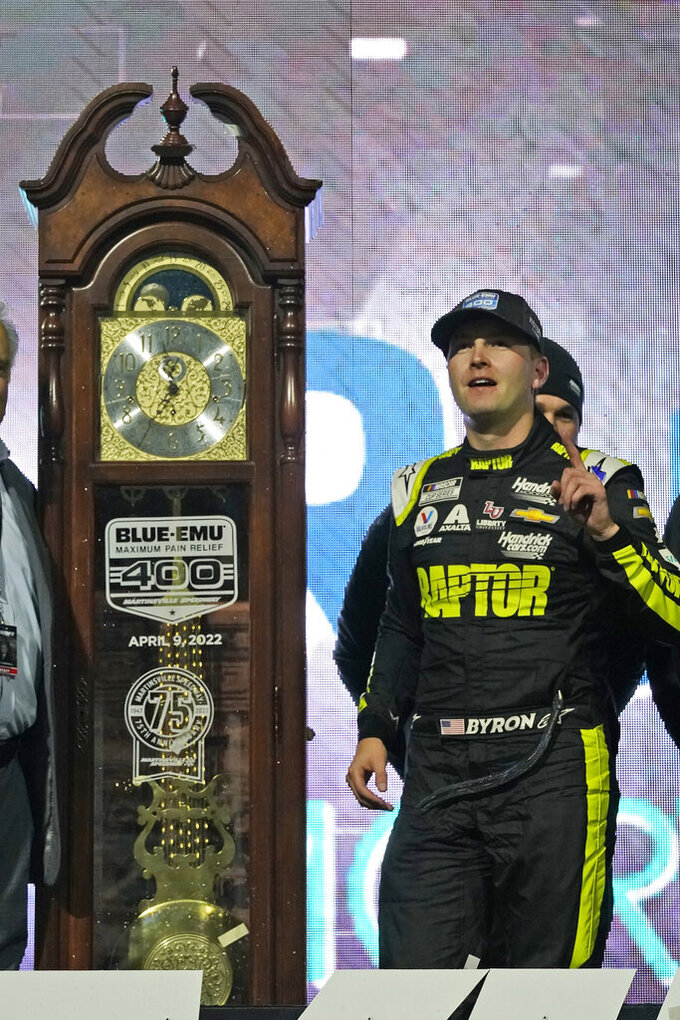 William Byron stand next to the trophy in Victory Lane after winning the NASCAR Cup Series auto race at Martinsville Speedway on Saturday, April 9, 2022, in Martinsville, Va. (AP Photo/Steve Helber)

William Byron knew when he took over the No. 24 Chevrolet for Hendrick Motorsports that Martinsville Speedway was more than a little bit special.

If he had any doubts, a field trip with car owner Jeff Gordon made it clear.

Gordon showed Byron around the 0.526-mile oval, shared some pointers and saw the trip pay off when Byron ran second in a race there to Martin Truex Jr.

Byron had three more top-10 runs in four subsequent visits, then put it all together on a cold night when the temperature made tire wear a non-factor. He also showed some chops as a front-runner, hanging onto the lead in a two-lap dash to the finish with Joey Logano trying to nudge him out of the way.

The victory in a race he led for 212 laps added a second grandfather clock trophy to his haul; he won the first in the Truck Series two nights earlier.

And it impressed the boss, who credits the chemistry Byron has with crew chief Rudy Fugle, and perhaps some of his own tutelage, with the success.

During the race, Byron and teammate Chase Elliott helped the Hendrick team reach 10,000 laps led on the shortest track in the series, becoming the first organization to manage that at any track. The team has won 27 races there, with seven-time champion Jimmie Johnson joining Gordon with nine of them.

The track also was the destination for an airplane that crashed in fog into a mountain in 2004, killing eight members of the organization, including team owner Rick Hendrick's son, Ricky, and two crew members on a day when Johnson, unaware of what had happened, visited a solemn Victory Lane.

It was that 2018 trip with Gordon, though, that emerged front and center in Byron's mind as the race unfolded, with him among the dominant cars.

“Definitely is special, and he’s got, what, 93 wins and however many clocks,” he said of Gordon, a four-time series champion. “We’ve got a lot of clocks to chase, but it’s cool to get that advice from him. Those little things that I picked up from him in my rookie year that I didn’t really use for a few years, and then as soon as I got towards the front I’m like, all right, that makes sense.”

Showing it by withstanding the challenge from Logano and leading as many laps as he did only makes Gordon more excited about the future of the 24.