Verstappen crash at British GP to be reviewed 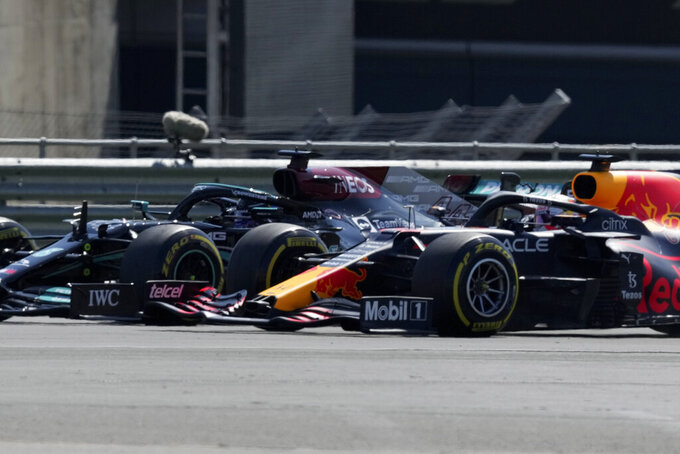 Mercedes driver Lewis Hamilton of Britain, left, and Red Bull driver Max Verstappen of the Netherlands take a curve side-by-side at the start of the British Formula One Grand Prix, at the Silverstone circuit, in Silverstone, England, Sunday, July 18, 2021. (AP Photo/Jon Super)

PARIS (AP) — Red Bull has successfully asked for a review of the incident at Silverstone between Formula One leader Max Verstappen and seven-time champion Lewis Hamilton.

The FIA will hear from Red Bull via video conference on Thursday ahead of the Hungarian Grand Prix. The team has been fuming since contact between Verstappen and Hamilton on the first lap of the British Grand Prix caused Verstappen to crash hard into a barrier and sent the Dutchman briefly to the hospital for evaluation.

Red Bull accused Hamilton of making a "desperate” move to edge ahead of his rival on the first lap because the reigning champion knew getting ahead of Verstappen at the start was his only chance to win on his home track and tighten the championship race.

Hamilton was given a 10-second penalty for the incident but recovered to win for the first time in six races. It snapped a five-race winning streak for Red Bull and cut Verstappen's lead in the title fight from 33 points to eight.

Verstappen has five wins to Hamilton's four this season and the Red Bull seems to at last have the pace to challenge Mercedes.

Red Bull must appear by video conference with its team manager and up to two other witnesses, according to the summons FIA issued on Tuesday.