Verstappen doubtful he can catch Hamilton in F1 title race 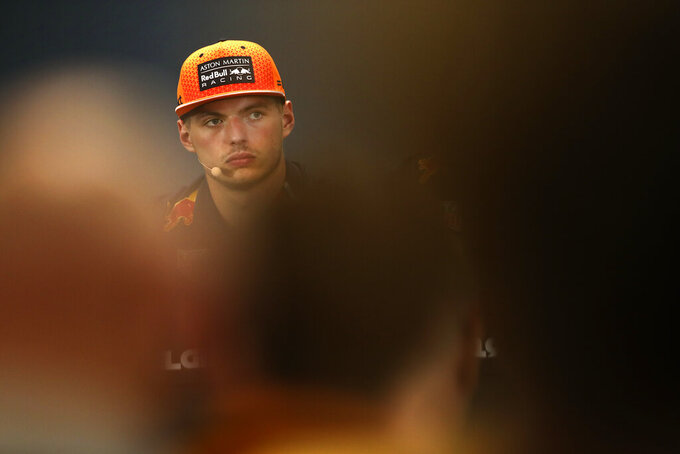 SPA-FRANCORCHAMPS, Belgium (AP) — Even the devoted legions of orange-clad fans forming a wall of noise may not be enough to convince Max Verstappen he can catch Lewis Hamilton and win the Formula One title race this season.

Making up a 69-point gap to Hamilton is a tall order even for Verstappen.

Tens of thousands of Dutch fans are expected to descend on the Spa-Francorchamps circuit nestled in the Ardennes forest, travelling in from the nearby Netherlands to cheer on Verstappen at Sunday's Belgian Grand Prix. They've attended every race in droves this season, but the sea of orange will be even bigger in Spa given the proximity to Belgium.

"It's amazing to see the big following. Obviously with the orange it's quite easy to spot a Dutch fan. Here we created our own grandstand, they're going crazy already before the race is even (started)," Verstappen said Thursday. "They get a bit crazy with flares and stuff, I remember going up the straight and it was almost turning orange. It's great to see and I'm happy to have such a big following, and I hope over the years it will only get bigger."

The way things are going for the 21-year-old Verstappen, that seems a certainty.

His popularity has soared in recent weeks thanks to an astonishing drive to win the Austrian GP , an ice-cool victory at the rain-soaked German GP in Hockenheim , and a fabulously long duel against Lewis Hamilton in Hungary where he held off the faster Hamilton right until the end, when Hamilton overtook him to clinch victory.

Still, one look at the leaderboard and Verstappen is realistic enough to acknowledge that it will be difficult to catch Hamilton, a five-time world champion driving for a faster Mercedes car which has experienced very few reliability issues. Especially since Spa and the Monza track for the Italian GP which follows are more suited to Mercedes than Red Bull.

"I think it's just going to be a bit track-dependent for us, where we are going to be more competitive. I'm expecting (Spa) to be a bit more tricky and especially Monza," Verstappen said. "From there onwards with upgrades coming to the car, we'll have a few tracks where we can have a good go. But for (winning) the championship I don't think so."

Verstappen is touted as a future F1 champion and shares the unshakeable self-confidence of Hamilton and others before them, like seven-time F1 champion Michael Schumacher and the late Ayrton Senna — arguably F1's two best-ever drivers.

The unflappable Verstappen seems to take even his rise to the top in his stride.

"It's quite natural, you get older and more experienced so for me it's not a big surprise what is happening at the moment," he said. "I think it's a natural process. I think it would be bad if you were already declining at 21."

But even with his exceptional driving skills, winning at Spa remains complicated.

Spa is the longest circuit of the season at 7 kilometers (about 4.3 miles) and Red Bull is expected to be the third-quickest car overall behind Mercedes and Ferrari, which won here last year after an accomplished drive from Sebastian Vettel.

"It will be a bit tougher for us because of the long straights. We just need to find a good balance in the car," Verstappen said. "It's flat out and then in sector two there are a lot of corners; so you have to find the right compromise."

Hamilton leads the championship by 62 points ahead of his Mercedes teammate Valtteri Bottas, but thinks Bottas and Verstappen can still push him.

"It could be either of them. Max is catching (Bottas) up and getting quite close on points," Hamilton said. "Red Bull have a couple of really strong tracks. Look at the end of last year; they were really strong towards the end. So I see them being a threat throughout the rest of the season."

Verstappen's race-day craft, uncommon speed and ability to withstand pressure is something to be wary of.

"You have to look at all the possibilities," Hamilton said. "If I don't turn up this weekend or the following one, if I don't deliver in the next races, if I make mistakes, I could easily lose the championship. There are points (available) to turn the tables."