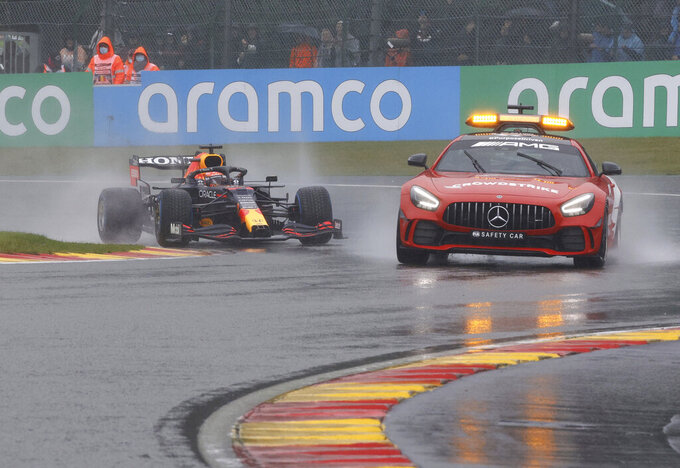 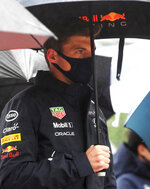 SPA-FRANCORCHAMPS, Belgium (AP) — Max Verstappen won a rain-soaked Belgian Grand Prix when it was finally called off Sunday after it restarted under a safety car nearly three hours later than its scheduled time.

The race was shortened to last one hour with only half points awarded to the winner, who needed to complete only two laps to earn points.

“Now, in hindsight, it was important to get the pole position,” Red Bull driver Verstappen said. “But it was a shame not to do proper laps.”

He was leading from Williams driver George Russell and Mercedes star Lewis Hamilton on Lap 4 when the restarted race ended after roughly 10 minutes with rain still lashing down.

“Of course it's a win but not how you want to win,” Verstappen said. “Credit to all the fans who stayed here for so long. They are the real winners today.”

Verstappen's sixth win of the season was the 16th of his career and stopped Hamilton earning a record-extending 100th win, while also trimming his overall lead from eight points to three.

Verstappen collected 12.5 points instead of 25, with Russell getting nine for his second career podium and Hamilton picking up 7.5.

Fans cheered loudly from the stands and the hills around the track when it was announced the race would start again at 6:17 p.m. local time (1617 GMT) — 3 hours, 17 minutes after it normally would have.

But after just 10 minutes of Verstappen rolling cautiously behind the safety car it was suspended for a second time at just before 6:30 p.m.

“I really hope the fans get their money back today,” Hamilton said. “They were incredible.”

The first time the race was suspended was shortly after 3:30 p.m. local time following a formation lap.

The 7-kilometer (4.3-mile) Spa-Francorchamps circuit was totally drenched. Soaked fans huddled under large umbrellas on muddy banks as they waited for the worst of the rain to pass. The thick clouds and mist hanging over the Ardennes forest also gave the circuit a daunting look and made for poor visibility.

When the drivers embarked on their formation laps the first time around, several complained.

“I really can’t see anything,” said Hamilton, who was chasing a fifth win at the track.

The decision to suspend the start was made a few moments later.

“It’s wet, but I think it’s fine to race,” said Verstappen who started from pole for the sixth time this season and ninth overall.

His teammate Sergio Perez appeared to be out of the race before it even started, sliding off the track during the warmup lap at around 2:30 p.m. and damaging his front suspension.

Red Bull asked race control if Perez could start the race if they repaired his car in time. The FIA said it was considering the request and later announced Perez would be allowed to start from the pit lane.

At 5 p.m. a further delay was announced.

McLaren's Daniel Ricciardo entertained the fans waiting in the grandstand from the pit lane. In his 200th F1 race, the popular Australian made extravagant hand gestures and waved to them as they chanted “Daniel, Daniel.”

“I obviously feel for them," Ricciardo said. "We're in it together but circumstances are out of our control.”

It was a poor show for F1 — following some thrilling races this season -- but for Russell it was a huge race for his career.

Russell, who came through the Mercedes young driver program, is being touted as a possible Mercedes driver next year if the team does not renew Valtteri Bottas’ contract. Bottas was 12th and scored no points.

Russell started from second following a brilliant qualifying session on Saturday that really caught the eye.

“We don’t often get rewarded for a great qualifying but today we absolutely did,” he said. “There’s been so much hard work over the past few years and here we are on the podium.”

Hamilton was critical of those who had let the race go ahead, he felt, for the sake of it.

”They sent us out for the two laps behind the safety car to get a race," the seven-time F1 champion said. “You couldn’t really see five meters in front of you. It was hard to even see down the straight. You couldn’t go flat out.”

The next race is the Dutch GP next weekend, where tens of thousands of orange-clad home fans will be roaring on their countryman Verstappen as he looks to reclaim the championship lead.