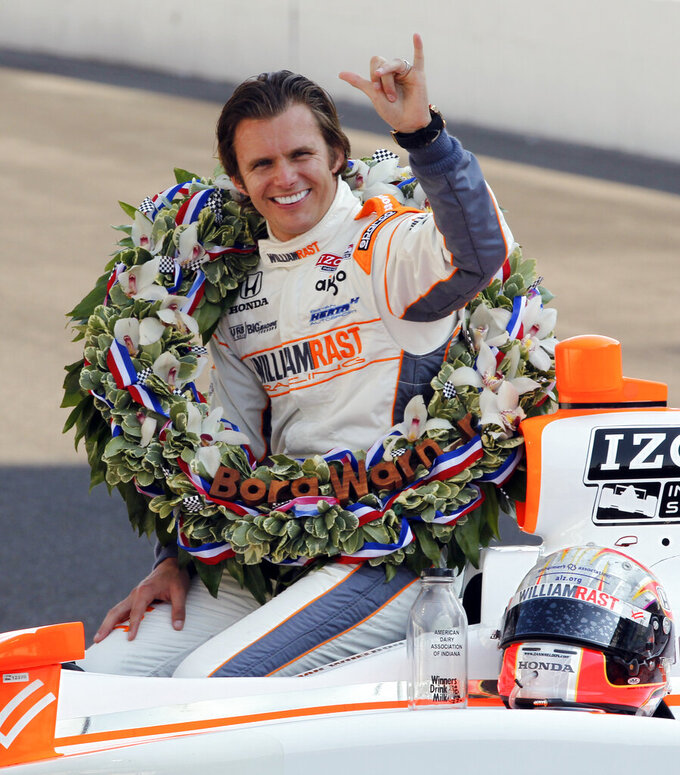 FILE - IndyCar driver Dan Wheldon, of England, signals his second win of the Indianapolis 500 auto race at the Indianapolis Motor Speedway on May 30, 2011, in Indianapolis. The memory of Wheldon hung over Las Vegas Motor Speedway, Sunday, Oct. 16, 2022, on the 11th anniversary of his fatal crash as NASCAR opened the third round of its playoffs at the track. It marked the first time a major race has been held at Las Vegas on the anniversary of Wheldon's 2011 death. (AP Photo/Michael Conroy, File)

LAS VEGAS (AP) — The memory of Dan Wheldon hung over Las Vegas Motor Speedway on Sunday, the 11th anniversary of his fatal crash, as NASCAR opened the third round of its playoffs at the track.

It marked the first time a major race has been held at Las Vegas on the anniversary of Wheldon's 2011 death. A plaque dedicated to him hangs outside the track.

The 33-year-old British driver died when his head hit a post after his car went airborne and sailed about 325 feet into the catchfence as part of a 15-car accident in the IndyCar season finale.

IndyCar has not returned to Las Vegas since.

As tributes to Wheldon splashed across social media on Sunday, Daytona 500 winner Austin Cindric said before the NASCAR race that Wheldon's death had an impact on him at an early stage of his racing career.

“The significance of Dan's passing was that he was probably the first driver that I had gotten to know going to IndyCar races (to) have a fatal injury,” Cindric told The Associated Press. “That was a really big moment for me in my life. I think Dan's passing, I realized how much tighter the sport is as a community.”

Cindric was 13 at the time and returning from a legends race when he learned of Wheldon's death. His father, Tim Cindric, is the president of Team Penske and was at the Las Vegas race. Tim Cindric said his son wore a commemorative Wheldon bracelet for years until it fell apart; Austin Cindric said he ran a “Lionheart” sticker in his legends car in tribute. Lionheart was Wheldon's nickname.

“I think we learned a lot, I think IndyCar learned a lot and, looking back at it now, I think the approach that they took could probably still be questioned,” Powell told the AP. "But if anybody thought there was an opportunity for it to be any more dangerous than any other race on oval, then they would have had second thoughts about it. But at the time, nobody thought it was going to be dangerous.

“And what happened here I believe could have happened on any oval.”

Wheldon did not have a ride in 2011 but put one together for the Indianapolis 500 and won the race for the second time in his career. Then IndyCar created a special promotion trying to lure stars to its season finale by offering a $5 million bonus to any non-IndyCar regular who could drive from the back of the field to win the race.

Wheldon would have split the money with a fan selected in a random drawing.

Allowing Wheldon to take the challenge was a stretch — he won 14 races on ovals, including the two Indy 500s — but because he had no full-time ride that season, he qualified for the bonus.

Wheldon was the in-race reporter for ABC during the event, and he spoke with the announcers during the warmup laps. In a brief interview, Wheldon defended his participation and the entire IndyCar Series.

“I wouldn’t be doing this if I didn’t think that I could win,” he said from his car. “Certainly I am not underestimating the talent of the other drivers in the field. I think IndyCar has got a phenomenal field right now.”

Wheldon was killed minutes later when the crash began ahead of him at the start of the 12th lap. The race featured a season-high 34 cars and Wheldon had picked his way through the field and gained at least 10 spots when he came upon the accident and had nowhere to go to avoid the spinning cars and flying debris.

An investigation into the crash found that Wheldon appeared to be attempting to avoid the cluster of cars spinning toward the top — he had slowed from 224 mph to 165 — but his path was blocked by other cars. His first contact with another car sent him airborne.

The race was the first for IndyCar in a three-year lease agreement, but the series never returned. Powell said he has communicated many times with IndyCar that it is welcome to return but believes the series finds it “too emotional” to come back.