Where next for F1? Australia race canceled, Bahrain in doubt 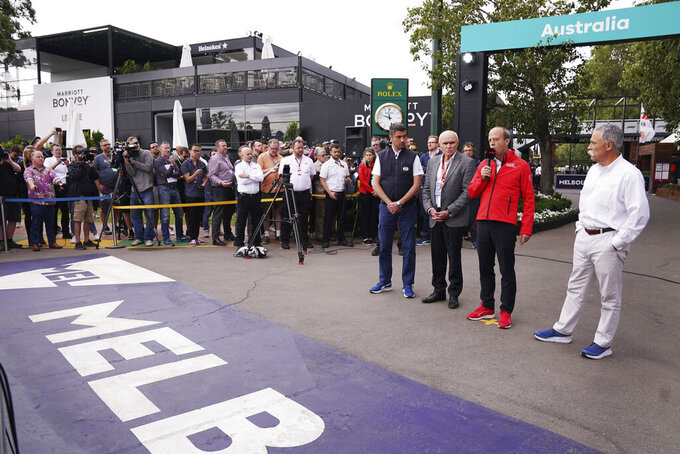 MELBOURNE, Australia (AP) — With the curtain-raiser canceled, and the second, third and fourth events postponed, it's anyone's guess where and when the Formula One season will launch.

The ”big circus" — as six-time world champion Lewis Hamilton calls it — doesn't really have a starting line after the season-opening Australian Grand Prix was canceled Friday because of the coronavirus pandemic. As midnight approached in Melbourne, the Bahrain and Vietnam races were postponed, too.

Where next? Some have suggested the season won't get underway until June, at the Azerbaijan Grand Prix in Baku.

There was supposed to be five F1 races between now and then, including Spain and Monaco.

Even before the Bahrain race was put on ice, the government had ruled no fans would be allowed to attend. Vietnam's debut as an F1 host will have to wait, too. It was supposed to be raced on a street circuit in Hanoi on April 5. No revised dates have been set. The Chinese GP, initially scheduled for April, was last month postponed indefinitely.

Travel bans or restrictions amid the growing toll from the COVID-19 illness are making predictions difficult.

“Everybody wants an answer — you can’t force an answer to something we don’t have an answer to," Formula One chairman Chase Carey said in response to questions about the race calendar. “We’re reaching out to every expert we can around the world — we’re a global sport. We’re not dealing with one country .... we’re dealing with an array of complexity."

Auto racing body FIA said in a statement that it will consider “the viability of potential alternative dates" later this year for Bahrain and Vietnam “should the situation improve.”

The season could possibly start in the Netherlands, at the Zandvoort track outside Amsterdam, on May 3.

“But given the sharp increase in COVID-19 cases in Europe in recent days, this will be regularly reviewed,” the FIA said.

Carey was in Vietnam earlier this week, negotiating with local organizers, before arriving in Australia just in time for crisis meetings involving Australian organizers, FIA and the principals of the nine F1 teams.

The other team, McLaren, had already withdrawn because a team member tested positive for the coronavirus and 14 others were placed in quarantine at a Melbourne hotel for 14 days. With such a depleted team, it was always unlikely McLaren could race in Bahrain anyway.

It's not the first major sport to suspend competition — the NBA, the NHL and leading golf and tennis tours have all done that already, and soccer is being played in empty stadiums in some countries.

But the global nature of F1, with 22 races scheduled from March to November and spread from Australia, to Asia, to the Middle-east, and Europe to the Americas, compounds the degree of difficulty in getting the timing right.

“We’re a sport traveling around the world that really started to move everything here last weekend," Carey said, defending the decision to bring 10 F1 teams and hundreds of staff to Australia while the coronavirus was spreading. “There’s a lead-time to what we do.”

The decision to cancel the Australian race was the only option with the health and safety situation changing so rapidly.

“Obviously in hindsight it looks different," he said. “But when things were changing as rapidly as they were, we were dealing with it in real time ... in a very difficult, challenging time. I think we all agreed, we made the right decision.

Australian organizers said it would be nice to stage the race later in the year, but that's unlikely given the distance and the crowded calendar later in 2020.

Most people quickly recover from the virus after experiencing only mild or moderate symptoms, such as fever and cough. For some, especially older adults and people with existing health problems, it can cause more severe illness, including pneumonia.

According to the World Health Organization, people with mild illness recover in about two weeks.

McLaren is leaving staff in Australia to stay with the 15 team members in quarantine. Those who didn't test positive were packing down before heading back to Britain, but were barred from going to the team headquarters at Woking for two weeks.

Ferrari is based in northern Italy, where there are coronavirus hot spots. Some governments have imposed bans on travelers from Italy, causing other potential issues for F1.

“In many ways, this is an unprecedented situation, certainly I’ve never lived through anything like this," Carey said, reflecting on the process that resulted in the cancellation in Australia. “The magnitude, the unpredictability, the fluidity of this. In that sort of situation, it’s important to get as much input as you can.

“Everybody came to the same place (and) made decisions that are right for our sports and for the places having our events."