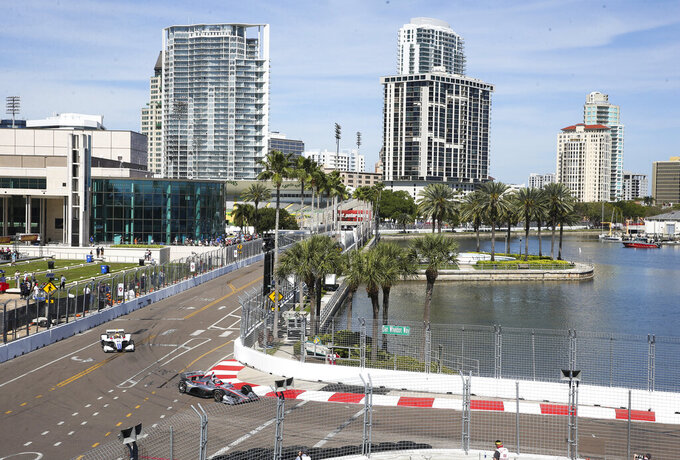 ST. PETERSBURG, Fla. (AP) — Roger Penske's teams are off to such a strong start to the motorsports season that his IndyCar group arrived at the season-opening event under pressure to match the performance.

No problem at all.

Will Power and Josef Newgarden swept the front row in qualifying to put a pair of Penske's Chevrolets out front for Sunday's race through the downtown streets of St. Petersburg. Not long after the IndyCar race concludes, Penske driver Ryan Blaney will start from the pole in the NASCAR race in Phoenix as the organization seeks its third consecutive Cup victory.

"I think when (Roger) refers to V8 Supercar races, and the last two NASCAR races, the teams are firing on all cylinders," Power said. "The pressure is on us for us to follow the lead."

The pole for Power is his eighth in the last 10 years at St. Pete and 55th of his career, second on the all-time list behind Mario Andretti.

Roger Penske was on Power's radio when he shot to the top of the board and the 82-year-old team owner gave a hearty "Woooo!" in celebration.

Power was stunned to learn he'd moved to P1 in his Chevrolet.

"I was over the moon, I really didn't think I'd get pole," Power said.

But Penske and team President Tim Cindric knew the three-car IndyCar lineup would be strong this weekend, in part fueled by the success of the rest of the organization. The sports car program opened the year with a podium finish in the Rolex 24 at Daytona and races next week in the Twelve Hours of Sebring.

"The IndyCar guys showed up this weekend and our drivers were like, 'It's up to us now,'" said Cindric. "In a healthy way it spurs them on. They can't get too comfortable."

Newgarden, disappointed to be nipped by teammate Power, said the expectation inside the Penske organization is to put in maximum effort at every turn to achieve results.

"That's what you feel when you join Penske," Newgarden said. "I don't know that it's pressure but I just think Roger expects you to understand and appreciate the history, and you feel the need to get the most out of yourself. You just push yourself to be the best you can be, and generally Roger puts the best people together."

The second row Sunday belongs to Chip Ganassi Racing. Felix Rosenqvist will start third in his IndyCar debut alongside reigning series champion Scott Dixon. Both Rosenqvist and Dixon advanced through qualifying because of penalties to two other drivers. Dixon made it out of the first round when Takuma Sato's time was disallowed, and Rosenqvist made it into the Fast Six when Colton Herta's times were disqualified for interference in the second qualifying session.

Herta thought he was a contender for the pole in his debut for Harding Steinbrenner Racing, but the 18-year-old rookie was instead eliminated.

"I blocked him, simple as that," Herta said. "I'm pretty mad, but rules are rules and we broke them."

The final two slots in the Fast Six went to Andretti Autosport as the top three teams in IndyCar all showed why they dominate the series with strong qualifying runs. Ryan Hunter-Reay and Alexander Rossi were fifth and sixth. Herta, who drives for a team that receives support from the Andretti organization, had been locked into the Fast Six until IndyCar said he interfered with Charlie Kimball.

Andretti thought it had another strong entrant with Marco Andretti, but he stopped on pit lane to bring out the red flag during the first qualifying group. Because he was the cause of the stoppage, Andretti was not permitted to advance out of the qualifying group — spoiling a day in which he'd shown good speed in practice.

Then Santino Ferrucci went off course in the final two minutes of the qualifying session, and it spoiled the runs of several top contenders. Both Simon Pagenaud and two-time defending race winner Sebastien Bourdais failed to advance when the Ferrucci red flag stopped the session. Bourdais won from 14th last year and started 21st in his 2017 victory.

Other items from St. Pete:

His new deal is for 12 races beginning at Circuit of The Americas later this month. He'll be a third entry for the team in the Indianapolis 500 alongside teammates Max Chilton and Charlie Kimball.

"Part of the history with Carlin is we specialize in working with young drivers," said team owner Trevor Carlin. "I'm always looking for talent ... I'm looking at the young drivers."

Klaus most recently was vice president of Honda R&D Americas. He has spent the weekend with St. Cyr meeting industry stakeholders and noted Saturday the welcoming from the IndyCar paddock.