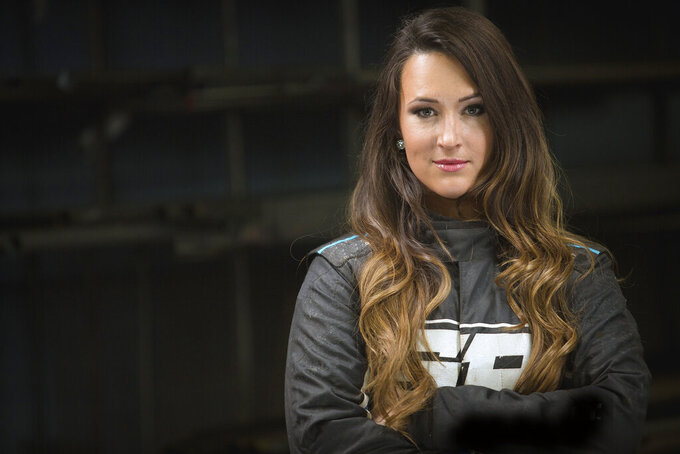 Sara Price needed less than two days in an off-road truck to complete an 800-mile solo race in Mexico. But to escape in a dune buggy from an entire flock of CGI ostriches? That daring drive in the desert took about nine days.

Price has her own IMDB page, in part for her stint as a stunt driver in “Jumanji: The Next Level.”

The 27-year-old Californian is ready for a starring role in a new electric SUV off-road racing series scheduled to begin in 2021. The former X Games medalist is set to debut as the first female driver in any racing series for IndyCar and NASCAR team owner Chip Ganassi.

“I have a lot of people that look up to me,” Price said. “There are a lot of little girls that bought their first Polaris Rzr UTV’s just to be able to feel like they can race and they feel comfortable enough to go out there and do it. A lot of them share that story with me.”

The Extreme E series has five events planned in what the league is calling “some of the most remarkable, remote and severely damaged locations on the planet.” The schedule calls for six-mile courses in Kangerlussuaq in Greenland, the Amazon rainforest in Brazil, Al-Ula in Saudi Arabia, the Nepalese Himalayas and Lac Rose near Dakar, Senegal.

Price is ready to hit the road. She is an electric motorsports novice -- she’s into high-speed, off-road desert trucks these days -- but figures she’ll be a quick learner.

Price picked up dirt biking at just 8 years old and became “that never-fazed fearless child and just kept going with it.” She won her first national race at 12, turned pro at 16 and joined Kawasaki as the first factory-supported female racer.

Price showed her mettle last November when she turned in an “IronWoman” effort at the Baja 1000 -- she drove 800.5 miles race as a solo driver team. She finished in 19½ hours,

“A lot of people thought I was committing racing suicide by taking on the Baja 1000 and driving it alone,” Price said. “But we did it and proved we’re a true competitor taking on the odds. I wanted that to be my championship. If something happened, I wanted it to happen to me in the truck.”

Price has a list of achievements most drivers would envy. She’s a 19-time amateur national dirt bike champion and was part of the first American UTV team to compete in the all-female Rally Aicha Des Gazelles in Morocco.

Racing is just her day job.

She owns her own auto paint business -- SP Enterprises -- with locations in four states. And when she was sidelined several years ago with shoulder surgery, Price entered the 2013 Miss California USA pageant to prove that “hey, we can be a badass female but we can also be pretty and girly on the other side of it, too.”

“There were a lot of scars to cover up,” she said, laughing.

Her connections in the stunt industry led to work in commercials and a high-profile gig in the latest “Jumanji” film. She's stunt doubled for Lady Gaga and even retired driver Danica Patrick.

Price caught Ganassi’s eye and signed on to team with a male co-driver to wrangle a 550-horsepower, electric SUV in extreme environments around the world that have been damaged or affected by climate and environmental issues.

Ganassi’s teams have 220 victories, including four Indianapolis 500s, a Daytona 500, a Brickyard 400, eight Rolex 24 At Daytonas in more than 30 years of racing. He once quipped of female drivers, “If rides were given out on popularity, I’d go hire Katie Holmes or Paris Hilton to drive for me. To get to this level, you have to be the real deal.”

Ganassi landed one in Price. She knows her role at Ganassi as she takes on her next racing challenge -- go out and win races.

“I want to get in it and drive it and show the world what I’ve got,” she said.